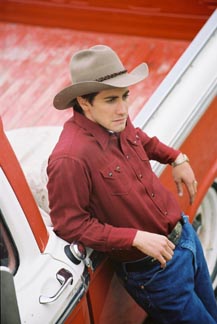 "You have judgments before you experience anything," says actor Jake Gyllenhaal about his role as Jack Twist in the drama Brokeback Mountain, helmed by Oscar-winning director Ang Lee. "And that judgment’s been formed by having been brought up [a certain way] – whatever. When I was first told about this script, I was told it was a gay cowboy movie and that I’d want nothing to do with it."

Brokeback is culled from a short story written by Annie Proulx which was first published in the New Yorker back in 1997 and then republished two years later as a collection of shorts called Close Range: Wyoming Stories.

The film is set during 1963 in the big-sky hinterlands of Wyoming, and begins when Ennis Del Mar (Heath Ledger) and Twist (Gyllenhaal) meet while waiting to see if they’ll be hired by Joe Aguirre (played by a bellicose Randy Quaid) to herd his sheep. The camera follows the two strangers as they are thrown together to take care of Aguirre’s four-legged property and slowly get to know one another. Neither of them are effusive chatterboxes, as they’re there to get the job done, and it is quickly established that both are as rugged and tough as the landscape that they’re riding over on horseback. But man cannot survive on canned pork and beans alone.

"The story, I think, just on its own, carries a real weight that, as an actor, if you just show up on the day and you just present yourself, it [pushes] you along. There is a real power to it," says Gyllenhaal as he points out what attracted him to the character. "There’s a part of Jack Twist that’s always hiding something and pretending like he’s better at something than he actually is – I really related to that. And in terms of, like, preparing for love scenes and those types of things, it was – both Heath and I knew exactly what we were getting [ourselves] into."

The timeworn motto uttered by millions of Nevada tourists – "whatever happens in Vegas, stays in Vegas" – is given the lie because these two particular cowboys can’t and don’t hold back. Suffice to say, things "occur" on one cold and rainy night and the bond that their initial bout of prurience forges ultimately bleeds over into the straight-as-an-arrow family-man lives that Ennis and Jack segue into when they part ways at the end of the Brokeback trail.

They don’t see each other for many years. It’s here that everybody’s aforementioned "normalcy" gets called on the carpet and comes to a grinding halt – when their paths eventually do cross again, thanks to Jack Twist’s due diligence, and the emotional spark, ignited years prior, flares up again like an un-extinguishable prairie fire.

"The name Twist referred to the strength that the bull rider had to have in his legs ... to hold on to the bull," the actor says as he sheds a little light on Proulx’s writing style. "It’s just a metaphor of that character that’s just so beautiful to me. It’s such a metaphor for all time, you know, like holding onto something that you really, truly believe in and that makes you feel alive and whole somehow ... that feeling’s universal. It just so happens that right now, on TV, we all love ‘Will & Grace,’ we all love ‘Queer Eye for the Straight Guy’ and all those things but things have changed [in the past decade] and there is a reason that this is coming out now."

Gyllenhaal’s portrayal of Jack Twist goes light years beyond the cavity inducing, Bambi-eyed roles he’s chosen in films past – who would’ve thunk it? Twist is so left-field yet recognizably Jake that by the time the two main characters lock lips and the bulls start bucking in the rodeo ring you’ll acknowledge a cinematic truth: Gyllenhaal’s got thespian karate chops that many didn’t know about.

"Just like in Crouching Tiger, Hidden Dragon, everybody references the fight scenes as a sort of metaphor for love scenes," Gyllenhaal states, reflecting on the love scenes with his co-star that border on fisticuffs. "You know there’s like a love-making somewhere in the fighting. I think the same thing goes for this film. It’s never what you expect or what you’d normally see – some people would say it’s a gay cowboy movie. I say it’s the Ang Lee movie about two cowboys who fall in love."

If this film doesn’t earn the actor any bones amongst the higher-ups in critical circles, then nothing will. According to the actor, wiseacres on the whisper circuit are already starting to come around.

"We were at the Toronto Film Festival and there was this reporter-journalist who stood up and said ‘I just want to apologize, for the past few weeks I’ve been referring to the film as ‘the gay cowboy movie’ in my column and I saw it last night and I want to say that I’m never going to refer to it as that again,’" the actor says before remembering a more intimate moment with his family.

"When I was walking out of the movie with my parents, my father was like, ‘If we weren’t talking after I saw this movie, I probably would’ve gone into the bathroom and kept crying’ and my mom felt the same way too ... My two gay godfathers walked out and they were like [that’s the way it is] ... Who the story’s for, I don’t know, but it’s definitely affecting different people in different ways."

Considering that earlier this month Gyllenhaal starred in the testosterone-laden military flick Jarhead, one might wonder how the actor feels about playing both ends of the sexual spectrum. "I welcome that and I love that," he exclaims. "I really appreciate the grey area and working in there. In terms of [Brokeback], it’s really interesting because we did this movie before I did [Jarhead] and now it’s coming out after it, so it’s like a really weird [timing] thing but I consider one a preparation for the other."

Bearing the latter in mind, when asked if he feels the need to assert his hetero male-ness on screen, Gyllenhaal doesn’t mince words. "I don’t need to portray any role to affirm my sexuality. Whatever questions anyone has about that, I welcome them. I think it’s interesting and I don’t need to affirm anything," he says matter-of-factly. "That’s why I’ve picked the movies that I’ve done and that’s why I picked this movie. And I don’t think [Heath Ledger] feels that way, either. I think when someone offers you Casanova – gay or straight – you should do it."