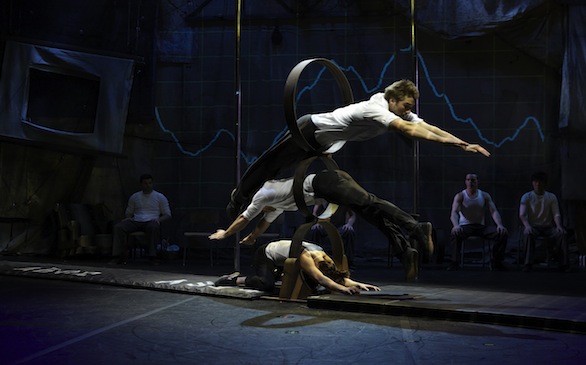 London-born and raised LJ Marles is a self-taught street and hip-hop dancer. It wasn’t until he was 18 years old that he became passionate about the circus arts.

Marles has experience performing in projects such as Finland’s Turku Festival, France’s Circa Festival and an outdoor series with the British National Theatre. He’s one of the performers of the upcoming show “Traces,” which is scheduled for three performances on April 26-28 at Dorothy Chandler Pavilion.

During a phone interview, Marles discussed many things – including his passion for circus arts, his experience with 7 Fingers and “Traces.”

Campus Circle: How did your passion for circus arts originate?

LJ Marles: I started out as a street performer with my friends. We used to come up with routines in my bedroom. When I was in London, I was involved with a local circus. We wanted to make a circus show with local youth involving rappers, singers and spoken word, all in a circus tent, and that's how it started. Then I started to work on trapeze, and then I went to circus school in London and spent three years there. I learned more about the art and technique there.

LJM: It's something for everyone – for all ages. There's theater, circus, skateboards and music. There are loads of funny moments in the show, so anyone can find something that they lik, and it's something very different from most shows. It's not just a musical or a play; it has a bit of everything in it.

LJM: There are six guys and one girl, and we're all on stage at the same time. There are no specific roles; we play ourselves on stage. We introduce ourselves at the beginning of the show, and we act on stage. We do our respective disciplines, and then we do group numbers throughout the show, but there are no particular roles.

CC: How has your experience been being involved with the company 7 Fingers and this show?

LJM: It's a dream come true. I first saw this show when I was in school in London, and I thought it was an amazing piece of work. I always thought I would love to be a part of something like this when it came back to town I went to see it again. It's a dream come true, and I couldn't be happier.

CC: What can you tell us about the wardrobe for “Traces”?

LJM: It's very bland to be honest. We all wear white shirts and grey trousers. The show directors want the audience to focus on the performers on stage and not so much on the costumes. We all have kind of a uniform costume, and that way people will focus more on what we do and not judge us so much on what we wear.

LJM: The show runs through July. After that, I'm not sure what's happening, but I'm just happy to go with the flow of the moment.

LJM: I would say, definitely do research. I didn't even know there were circus schools out there but I came across it and just happened. I feel lucky that I found this path. Even if it's something that might not be considered a traditional career, I recommend looking things up and seeing what your options are just because it's not a normal path to take. If it's not available at a university, it doesn't mean it doesn't exist. If you have a dream or a passion, do your research and see where it can take you.

For more information about the perfomances of "Traces" in L.A., click here.