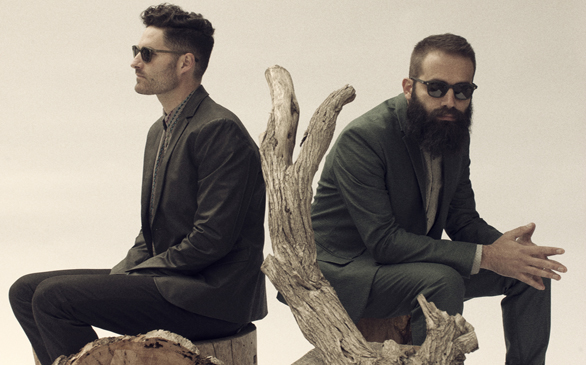 The lead single, “Safe and Sound,” depicts their predominant musical influences of electronic and dance-oriented elements, but they also fuse pop and rock. The track is a Top 10 modern rock hit.

Los Angeles-based Capital Cities will drop their debut album, In A Tidal Wave Of Mystery (Capital Records/Lazy Hooks), on June 11. It will include songs from their self-title EP, including “I Sold My Bed, But Not My Stereo” and “Love Away.”

Capital Cities, who appeared at Sundance, SXSW and ULTRA earlier this year, begin their “Dancing With Strangers” tour on Tuesday, April 23 at the Crescent Ballroom in Phoenix, Ariz. The band’s scheduled to perform on June 5 at the House of Blues Anaheim before playing twice (June 6-7) at the El Rey Theatre in L.A. All proceeds from the June 7 will go to MusiCares and A Place Called Home.

During a phone interview, Ryan and Sebu spoke about how they met, the meaning of their stage name and musical influences, among other things.

Campus Circle: Discuss how you met.

Sebu Simonian: Ryan and I have both been doing music all our lives. Back in 2008, Ryan was looking for a producer for his solo project, and I had just put out an ad on Craigslist offering my services as a producer. Ryan was the one and only person who responded to the ad. Then he came in, and we started collaborating on a variety of projects, including his solo project, and then other things. At that point, we kind of fell into writing music for commercials, and we kept working together until we decided to form a band because, obviously, we wrote a lot of material, and the collaboration was fruitful. So Capital Cities was form at the end of 2010, and then we released our debut EP in June 2011.

CC: How did you go about choosing this stage name, Capital Cities?

Ryan Merchant: It came from a brainstorming session. We were on Gmail chatting and we were trying to come up with the name, throwing back ideas back and forth. I put out the idea of Capital of May and then Sebu almost immediately wrote back and said, 'How about Capital Cities?' When I saw the name it immediately struck me as the perfect name. We both got a good read on it instantaneously that it was perfect on many levels – looked really good with the two Cs. We liked what it represented – capital cities throughout the world. It felt sophisticated; it felt fun, and the font looked good. It's just one of those things where it just came together and seemed like the perfect name, but it wasn't like it was planned out. We weren't searching for it. It just sort of popped into our heads.

CC: What have been some of the musical influences the group has had throughout its existence?

SS: Capital Cities is definitely electronic and dance-oriented, but we take influences from all kinds of music and all genres. First and foremost, we focus on the songwriting, so we're very keen on making sure that the melodies and the harmonies and lyrics of all our songs are the focus and the most important element of the song. Then, we think about how to produce it to make it fun and exciting and interesting musically although the process of songwriting and creating our tracks do vary, and sometimes we start with the production. But the most important element is the song itself. In terms of influences, we draw from bands from every decade: psychedelic/British rock from the 60s until today – like Pink Floyd, The Beatles…then also Radiohead, and Oasis…

CC: Where does your inspiration for songwriting come from?

RM: When you have two people collaborating 50-50 on songs, I feel that the material naturally becomes a little less personal. This is because you're balancing out the two personalities and you each have something to say – it kind of meshes into this interesting message. Sometimes we'll have an idea in our head, and we'll both have different ideas of what the song is actually about. So we'll talk about the lyrics after we've written the song. I'll mention something specific about a line and say, 'This is what it means to me.' But it might mean something else to Sebu, which is kind of cool that we both sometimes interpret our songs differently. But it comes from this sort of stream of consciousness place; we'll just lay out a beat, get on the piano, get on the guitar and oftentimes a line will come into our head – some sort of catchy line. We like to find phrases that are sort of unusual. For example, 'I sold my bed but not my stereo.' That line came to us and we sort of built a song around that chorus line. So, that's how the process works.

CC: What's the meaning behind the lyrics of “Safe and Sound”?

SS: The lyrics for 'Safe and Sound' are simplistic in style, but there are basically three stanzas. Each stanza begins by describing a negative situation – a doomsday scene. But they always end with a positive outlook – 'so even if the sky is falling down, I know I'll be safe and sound.' I guess the point of the song is for it to be an antidote for lot of negativity in the current generation. Every generation goes through this, where they think it's the worst of times, and the end of the world. This song is trying to inject some optimism into society and into the listeners. It's a joyous, happy song that poses a negative outlook with a positive one.

CC: During the process of making the self-title EP, was there a concept in place or was it something that came out of randomness?

RM: It was random. I don't think there was a concept behind it, but our sound definitely evolved from when we first started out. The first show that we played, it was set up as if we were more of a rock band. There were drums, two guitarists, a bass, no trumpet…and we hadn't been introduced yet. Then after that, we decided to strip it down and make our songs a bit dancier. The two of us started performing just as a duo – started going electro. The EP was sort of born out of that. We also had this Juno-106 analog keyboard from the 80's that was just sitting around in the studio. We never really messed with it, and then we took it out and we put it on 'Safe and Sound' when the song starts. The EP is pretty much built around that particular synthesizer. But as far as a grander concept, it wasn't anything premeditated except for just writing what we thought were good songs, making them dancy, and giving them an interesting sound.

CC: How important is it for the group to not only engage fans through social media, but also keep them informed of updates?

SS: It’s important. The first year and a half of Capital Cities we were doing things independently, so we pretty much relied on social media to build our fan base. We utilized Facebook and Twitter, but everything pretty much centered around Facebook. That's how we communicated with our fans; we were also taking advantage of the blogosphere and keeping in touch with our fans – even to this day. We were very obsessive about keeping track of who was keeping track of it, talking about it, whether it was on Twitter, through blogs writing about us and getting in touch with those people. We were thanking them for writing about us, while building some kind of relationship, even if it was just through email. This was so that later on when we had new material (released singles or did covers), we already had this network of people who would spread the word for us. Se didn't have a PR person, so we pretty much did it ourselves and utilized this network that we built of fans and bloggers. So it's been very helpful for us.