The Impossible, A Haunted House & Jurassic Park on Blu-ray 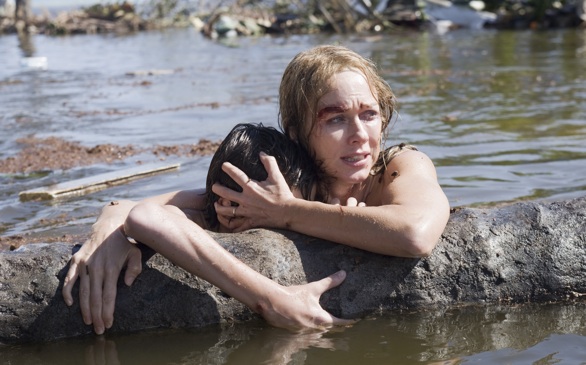 Naomi Watts stars in The Impossible, a true story of a family caught in the Thailand tsunami.
(Credit: JOSE HARO)

The Majors: A devastating true story, The Impossible follows one family’s journey as they are caught up in 2004’s massive tsunami in Thailand. Naomi Watts and Ewan McGregor play Maria and Henry, a married couple on vacation with their two boys when the earthquake hits in the Indian Ocean. In the ensuing chaos, the family is separated and adrift in a strange land as they try to reunite with the help of strangers. María Belón, the real-life basis for the story, provides a commentary track.

Promised Land stars Matt Damon, a representative of a fracking company who comes to a rural community in order to entice its struggling inhabitants to sell their drillings rights. The usually slick salesman soon finds himself in over his head when an environmentalist (John Krasinski) arrives and starts educating the townspeople about the dangers of drilling. Damon and Krasinski co-wrote the script for director Gus Van Sant. Frances McDormand co-stars.

Before Harold & Kumar, another stoner duo supplied the laughs to accompany the munchies. Cheech & Chong’s Animated Movie brings to life the comedy team’s most famous sketches from their Grammy-winning albums.

The Horror! The Horror! The awkwardly titled Haunting in Connecticut 2: Ghosts of Georgia transplants the supernatural horrors of the first film to the Deep South. A young family moves into a historic house only to discover there are secrets in that history, as evil forces begin to terrorize them. Chad Michael Murray and Abigail Spencer star.

The Idiotbox: Georges Simenon’s classic detective continues his onscreen investigations in “Maigret:” Box Set 7 & 8. Bruno Cremer is the contemplative, pipe-smoking Commissaire Maigret, a Parisian detective who always gets his man. Set in 1950s Paris and the French countryside, “Maigret” is an atmospheric whodunit sure to satisfy lovers of the genre.

A surprise hit for History, “The Bible” is an epic 10-part miniseries that brings to life the greatest hits from the Good Book, from creation to Revelation. Full of special effects and picturesque locations, the series breathes new life into these classic stories. For nonbelievers, it’s a great primer in understanding some important cultural reference points.

A classic TV western with a twist, “Maverick:” Season 2 follows a pair of poker playing brothers (James Garner and Jack Kelly) as they con and seduce their way through the Old West, always getting more than they bargained for in the process. This season features guest stars like Martin Landau, Robert Conrad, Roger Moore and a young Clint Eastwood.

Stranger Than Fiction: Just in time for Earth Day, Disneynature: Wings of Life is an incredible nature documentary that will put in perspective the importance of maintaining the ecosystem. Focusing on some of the planet’s smallest life forms, Wings of Life enters the world of bees, butterflies, birds and bats, and shows how each of these creatures has a role to play in maintaining the earth’s balancing act, providing one-third of the world’s food.

Blu Notes: With a forth entry in Steven Spielberg’s dino blockbuster franchise in the works, it’s a great time to revisit the original special effects phenomenon Jurassic Park in 3D. This release is loaded with extras, including a featurette in which Spielberg walks viewers through the 3D conversion. It also includes the 2D version.