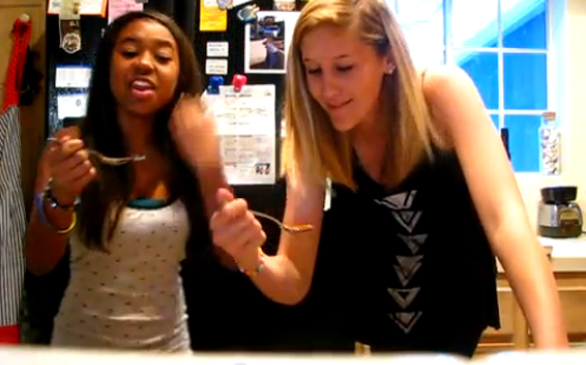 The cough-inducing effects of taking the "cinnamon challenge," in which thrill-seekers try to swallow a spoonful of cinnamon without water in less than a minute, can be seen all over the Internet.

Some health experts have voiced concerns over the dare taken on mostly by teenagers, but the lead researcher in a new report published online Monday says it may lead to inflamed and scarred tissue common in lung diseases like pulmonary fibrosis and emphysema.

The report, whose results will also be published in an article in the May edition of the Pediatrics health journal, was based on testing with rats.

Dr. Steven Lipshultz, the lead researcher, said the rats were made to breathe in cinnamon powder one time, then were followed as they aged.

"(The) cinnamon would coat the airways and the lungs (of the animals) and it would lead to inflammation," Lipshultz said. "It wouldn't stop there. The inflammation led to scarring in the lungs, something called pulmonary fibrosis."

The lung disease, which causes shortness of breath and chronic coughing, can lead to hypoxia and, eventually, heart failure.

Lipshultz, a professor of pediatrics at the University of Miami, said his team of researchers based their report on previous animal studies because they were unable to find any studies of cinnamon inhalation in humans. But the cinnamon challenge is popular among teens, particularly college students. The dare is particularly problematic for those suffering from bronchopulmonary diseases, including asthma, according to Lipshultz.

"Anyone who tries to swallow a tablespoon of dry cinnamon, when they choke on it, it not only goes down their food pipe ... they also breathe in and some of this powder goes in to their airway" and could get drawn into the lungs, Lipshultz said.

Lipshultz recalled when he realized how prevalent the dare had become.

While eating dinner with his family last March, he recounted his plans to travel to New York for an interview about the cinnamon challenge. His four children, who range in age from 14 to 25, said they had all already heard of the dare.

"One of our kids was a freshman at Harvard, and she said, 'Dad, everybody does this in college.' And they started pulling up YouTube videos and started laughing. And I thought, as a pediatrician, this is kind of startling. (The people in the videos) are stuttering; they can't catch their breath."

Lipshultz said that the challenge, prominent on social media websites, is fueled by peer pressure and popular culture, including celebrities and other well-known figures. Illinois Gov. Pat Quinn, for instance, tried the dare on a radio show last year, though a video on YouTube shows him gulping water to swallow down the spice.

For the first six months of 2012, there were 178 calls to the U.S. American Association of Poison Control Centers related to the cinnamon challenge, according to the study.

Dr. Scott Goldstein, a pediatrician at The Northwestern Children's Practice, said he hadn't seen any cases, nor had he heard of the dare, but he wasn't surprised of the potential consequences.

"If you inhale (cinnamon), that could be pretty dangerous, because it's like a powder," Goldstein said. "It's like when we tell parents not to use baby powder" - because the powder could be inhaled by an infant and get into the lungs, he said.

Lipshultz says the number of cases that have been reported nationwide is only the tip of the iceberg.

"Those numbers relate to people intentionally calling (in). ... You know as well as I do that if you have a teenager or college student who becomes ill, how common is it for somebody to call a poison control center? Not that common," he said.

Asked whether any of his four children had tried the dare, Lipshultz didn't think so. But, he added, "I'm their father. I'd probably be the last to know."