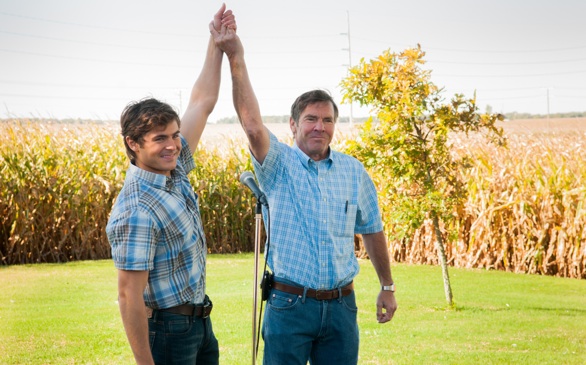 Set in southern Iowa, Ramin Bahrani’s At Any Price captures a family’s struggle to overcome a crisis in the modern world of agriculture. The film has undertones of a longing for the simplicity of the past but serves to always remind the audience the past is gone, and adapting is the only way to succeed in the future.

Henry Whipple, played by Dennis Quaid, is a go-getter farmer who wants to expand his business “at any price,” so to speak. However, his sons see it a little differently.

His eldest son leaves home, and his youngest son Dean (Zac Efron) wants to become a professional racecar driver, halting Henry’s plans to pass on his farming legacy to his boys. But this becomes a minor problem when their business gets investigated, threatening the end to the entire legacy.

The problem originally arises in this small town after modern and industrialized business replaces traditional seed farming, adding enormous competition to the world of farming and completely wiping out old practices.

Henry, who inherited the family farm after four generations, follows the new business model of “expand or die” at any cost, even if it means taking other people down in the process. In competing with rival famer Jim Johnson (Clancy Brown) for seed sales, the Whipples push moral and ethical boundaries, making the audience question the people they are.

When the Whipples’ seed selling operation is put under investigation, Dean finally steps up to the family plate. However, this produces dyer consequences, challenging the family to face moral issues.

Bahrani uses the farming world as a major backdrop for the film, but the film’s various layers share a perspective of a much more broader scale. As the characters are tested, their faults and morals are also exposed. No one in this film is perfect or easy to figure out, but rather they are various shades of grey.

You’ll find yourself asking while watching the film: How “good” is the protagonist, and how “bad” is the antagonist? While this makes for a much more complex film, it was hard to empathize with any one character. This is not simply because the characters made mistakes, but because of how severe the mistakes are.

Efron and Quaid both gave standout performances. Efron easily slipped into the rebellious son role, playing a character far from any character he has previously played. He was 100 percent believable as a son wanting nothing more than to get away from his family.

Quaid also gave a memorable performance as the obnoxious farmer who would do anything to make his farm No. 1.

Heather Graham, who played Henry’s mistress Meredith, and Kim Dickens who played Henry’s wife Irene, made for a good ensemble cast. Each portrayed women on opposite ends of the coin and complemented Quaid’s character, revealing his two conflicting sides.

As good as At Any Price is, it does not give the audience the emotional pay off usually expected at the end of a film like this. But it does succeed in stirring up emotions and ethical questions.

At Any Price sets a goal of illustrating the imperfection within people and the line between right and wrong. The cinematography in the film is stunning, and Iowa provides the perfect scenery for the drama accompanied in the film; the characters’ emotions do not get lost in the scenes.

If there is one thing At Any Price does successfully, it’s creating a world you can easily get lost in.

At Any Price releases at select theaters in L.A. and N.Y. on Wednesday, April 24.