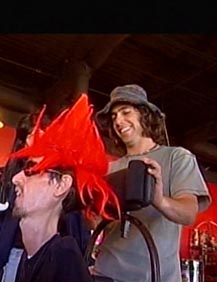 39 pounds is the weight of a small child. It is the weight of a couple of textbooks. It is also the weight of Ami Ankilewitz, a 36-year-old man afflicted with muscular dystrophy who is the subject of the new film, 39 Pounds of Love. The film has just been named as one of 12 feature-length documentaries competing for a nomination for the Oscar.

The film’s director, Dani Menkin, originally met Ami at a bar in Tel Aviv. He was struck by Ami’s story of a doctor who said he would only live to the age of six.

The script for the film was constantly changing. Menkin says he knew about Ami’s animation work before shooting. In the film, Ami works at the computer on an animation piece that mimics a romance in his life. He uses only one finger to do all of it.

"I was amazed by his abilities," Menkin declares.

He was so impressed that he edited in more animation than originally planned.

The romance came out as Ami expressed his love for his aide, Christina. When she was unable to return the affection, he asked her to leave, as it would be too difficult to be around her. That’s when the cross-country portion of the film begins.

"We wouldn’t have done it if Christina hadn’t left," Menkin says. "Ami was in such a bad mood. To recover, he had to take the trip."

On the trip, Ami desires to accomplish a number of things. He wants to make peace with his brother, who was always jealous of how much attention Ami received. He wants to meet up with the doctor who told him he would only live six years. He also wants to fulfill a lifelong dream of riding a Harley-Davidson motorcycle.

"He wanted to close a circle in his life," Menkin says. "His dream became our dream, too."

Now the film, which recently won the Israeli Oscar for Best Documentary, has turned Ami into a celebrity. He has visited hospitals and attended screenings, telling his story.

"There are people who want to be inspired by him," Menkin remarks.

In the film, people at times react to him with strange looks as he goes down the street in a wheelchair. He has extremely skinny arms and he speaks through a microphone. With the recent underperformance of the wheelchair rugby documentary Murderball, there may be a worry that American audiences are still not ready for this type of subject matter. Menkin puts that worry to rest.

"Ami, the way he looks, he’s 39 pounds, people maybe feel it’s a downer of a film. But people were laughing at the screenings. They see that he’s a cool guy. People come to the theaters and love him."

And on top of all that, there’s a bonus for Ami.

"He has a new girlfriend now," Menkin says. "So it’s a happy ending."

39 Pounds of Love is currently in theatres.