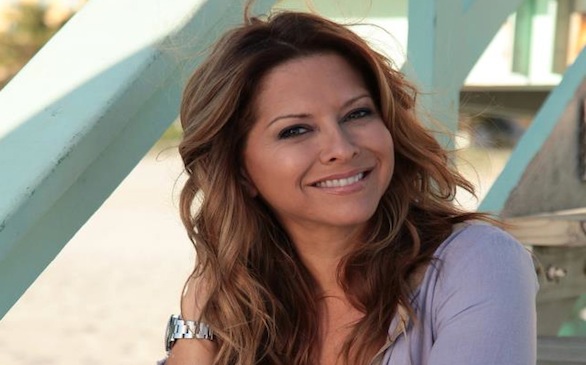 Our world can significantly benefit from people such as Colombian-American Ingrid Hoffmann, a famous television personality and restaurateur. Hoffmann’s the host of “Simply Delicioso” on the Food Network/The Cooking Channel and “Delicioso” on Univision, but she’s also an author.

Recently, she released Latin D’Lite: Delicious Latin Recipes with a Healthy Twist, now available in both English and Spanish at all stores carrying books and via digital download. The book sports more than 150 recipes of Latin food dishes; they’re exquisite with a healthy touch. In them, Hoffmann details options for appetizers, salads, drinks and even cocktails on top of other delicious subjects.

During a phone interview, Hoffmann talked about the idea behind the book, her lifestyle of cooking and eating and more.

Campus Circle: How does the concept for this book, Latin D’Lite, come about?

Ingrid Hoffmann: It's about a real person admitting to their addiction and binging, and dealing with it and discussing it openly. It's what has helped me get on track; it's a lifestyle that I have adopted. The biggest trouble with America is not bulimia or anorexia; it's bingeing, and it's not something you hear a lot of people talk about. The trouble with people that binge is that we go on every diet in the book because it's all about all or nothing. We're setting ourselves up to fail, so it really is about finding the grey, not the black or the white...finding a way to eat deliciously within the grey zone. So cutting down on calories where you can and making it in a way that people can actually do it and relate to it and be able to apply them to their life.

Although the book doesn't count calories, every calorie that you save throughout the day...allows you to have your occasional splurges, except that now you can do them controlled. And in every chapter you'll see binge or splurge recipes as well.

CC: How did this become your lifestyle?

IH: I try to eat this way most of the week. I allow myself two binge meals a week. If in the morning I'm already making healthier choices in an easier way, and I do that throughout my day, then I'm saving calories. I'm not telling you to substitute your taco for a lettuce because I think that's the healthier thing to do – not always. It's not realistic, so that's where I go, and I try to change a little bit of everything. It's not a drastic change. The flavor is the same, and you don't feel like, 'oh my god I want to eat tacos, my son was eating tacos, and I feel so deprived.' That's what this is about: not feeling deprived.

CC: Did the book title take a long time or did it just come quickly?

IH: I've always played with that name. It's delight, as in delighting yourself. Your dinner should not be a boring piece of chicken. When we start a diet, day one, we're all gung ho. Then you get a bland piece of chicken and you say, 'If I get another bland piece of chicken, I'm gonna kill myself.' So that's where the delight of eating later can be so delicious and delightful. It can help you save for the weekend; it's about living delightful and not depriving.

CC: The book has been released in English and Spanish. Would you consider another language?

IH: Sure. Absolutely, I would love it. The more the merrier. I would love it, but I think that I should be so lucky to find somebody to want to do it in another language – maybe from your mouth to god's ears.

CC: Were there any difficulties in making this book a published product?

IH: These are things that nobody likes to talk about and people say, 'you're not a dietician.' No I'm not. I'm a woman, and I struggle with it. I am around it all the time. So when you sit there, and you're talking to a therapist and they say, 'you're not alone', this is what the majority of eating disorders in America are. It's not bulimia. It's not anorexia. It's bingeing. For the all or nothing person, we either go to the one extreme or to the other extreme. I'm not only telling you that you have to be in the middle, but I'm actually, in each recipe, showing you how to do it. In a way you yourself can; in a way a 9-year-old could if they had to.

CC: Why should the young adult and/or the college student get this book?

IH: I have a three-minute breakfast you can make in your microwave, in a coffee mug. You throw in two egg whites and a full egg. You can have jarred peppers that come in oil, which is a natural preserve. You can throw one in, and grab it with scissors, cut it all up, shake it all up, and stick it in the microwave for three minutes, and you can have a healthy breakfast. It doesn't cost much.

CC: With the lifestyle that's depicted in the book, would you recommend some type of exercise or do you think this is something we can follow and practice without even exercising?

IH: Sure. Walk. There are no secrets. I can tell you about the food, but if you're not willing to move, then it's a combination of everything. It's a lifestyle of thinking. A walking group is a great thing; it doesn't cost anything, and you can catch up on people's lives instead of meeting up at the bar. It’s a fun activity.

CC: Why do you think we don't have more people practicing this lifestyle?

IH: Because we all live with temptation, all day long. I'm not going to tell you I don’t like to open up a Coca-Cola and have a packet of peanut butter M&M's or salt vinegar chips. I love it. It's just that I need to find ways of doing it less, and I like my junk food just like the next person. I really do. I admit to it and I don't have a problem with it. The other thing is that we're all ingesting all these processed chemicals. The more people you see following a diet, the fatter they are and it's because we're not made to process all these chemicals. I think we should eat a little bit more like our ancestors did – real food. I think that this has to do with all the obesity and all the processed sugar.

CC: What else do you have in your agenda for the next few months?

IH: We will be launching our line on the home shopping network in July, which will be expanding to pots and pans. We are now fully expanding into kitchen gadgets; it will turn into a full-on line of drinkware, china, everything. This is a retail project that takes effect in the fall and, obviously, I'll be working on the next book that always takes me a few years. Unfortunately, you're working on your current one and you already have to work on your next one. Also, working our way back into the general market and continuing all our work with Latin TV…It's a good time to be Latin in this country. I think this is our opportunity. We elected the president and they can't continue ignoring us.

CC: If you could do something to better the state of the country, what would you do and why?

IH: For one, I would have us Latinos unite more and instead of focusing on our differences from country to country, we would see that we actually have a lot more similarities culturally, and our mother tongues would unite. I think if we all band together and we all see ourselves as Latin Americans, I think we could do a lot more and our voices would be a lot louder by uniting. As a Hispanic, that's something I would encourage.

Special Features
Cybersecurity for everyone: 5 books on defending ourselves in the digital age
1,304 views

Special Features
In his journey from jail to Yale Law, felon-turned-poet writes 'to remember who I am'
730 views