It’s All About Los Momentos for Julieta Venegas 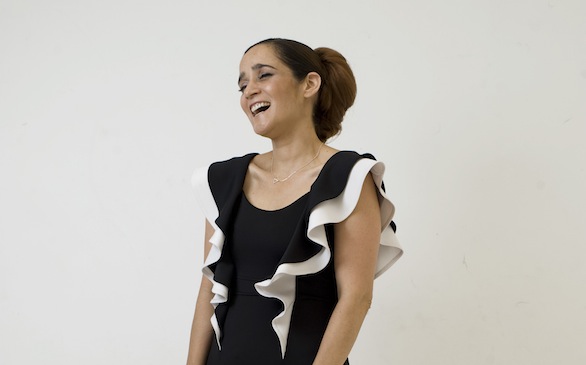 Mexican singer-songwriter Julieta Venegas loves to read, a lot. But she writes more than she reads. In fact, at times she doesn’t even recognize that she’s making an album.

The five-time Latin GRAMMY winner and one-time GRAMMY recipient sat down with Campus Circle to discuss her latest release, inspiration for writing songs, what the city of Los Angeles has meant, point of view on social media, and hobbies, among various things.

Campus Circle: How did the project of your new album, Los Momentos, come about?

CC: Where does your inspiration for writing songs come from?

JV: Everywhere. I like to read a lot. I read a lot of novels, but it's just something that I really love to do. It comes naturally. I'm not looking for inspiration, it just happens but also from everything that happens, and doesn't happen. I just like to write and be able to express myself that way.

CC: Do personal experiences come into play in your songs?

CC: In the track, “Vuelve,” you collaborate with Ana Tijoux and Rubén Albarrán of Café Tacvba. How was the chemistry, and how was working with them?

JV: I think Ana’s one of the most important hip-hop artists in general. In English, Spanish, any language. I think the way she expresses herself is very smart and eloquent, and her voice is great. I'm just a really big fan, and she's also my friend. I'm lucky to be amongst her friends. When I was doing the song, I really thought about calling her because I thought she could balance out the idea of the song which is about someone from Mexico, outside of Mexico, coming back to Mexico to not let fear stop her from coming. It was a way of finding another vision of the idea of the song. Then Ruben also came along, and I think he gave a lot of strength to the track; it was like a trio that we're doing.

CC: What’s the meaning behind the album cover?

JV: I really like the idea of a representation of me, not me in the picture. The interesting thing is that the illustrator, Richard Hayes, and I had never met before, and he just kind of interpreted different images of me. I really like the look of this illustration in particular. I think it really represents the album well.

CC: Not too long ago (April 16), you performed at Amoeba Music in Hollywood. It was a packed house; everyone was cheerful and very glad to see you. What did you take from that experience?

JV: I love playing at Amoeba because I'm a big fan of Amoeba itself as a store and I've been there many times. But this was the first time I've ever played there; it was great. I loved playing there. I think everybody who was there really enjoyed it. Being able to play at a place like that and the way people were and their attitude towards us, they were enjoying it and loving it. We were all just happy being there.

CC: What has the city of Los Angeles meant to you throughout your career?

JV: I've been here a lot of times. I used to come here a lot because I'm from Pacoima so I was here a lot before I started making albums. Then when I went to live in Mexico City, I started coming here since my first album released. People have always been great here in Los Angeles and it's just a great audience. They really enjoy the show and they're really intense and curious; it's just the ideal audience.

CC: What's your take on social media and how do you utilize it to engage with your fans?

JV: I just enjoy using it. I'm not using it as a tool to engage fans. I just kind of use it because I enjoy it. I enjoy posting music and other people's music. I like sending messages to people when they go to the show. It's pretty practical and I also like it as a way of getting information around not just about me, but also about other people that I admire and enjoy listening to.

JV: We're starting the tour in the last week of April. Then on the second week of May we're going to South America. Then in July we're going to Europe and in September we're going to be playing here in the U.S. And then we'll just keep on going.

CC: What advice do you have for youngsters who want to pursue their music dreams?

JV: I would say it's a lot easier now. There's a lot of technology that really helps you be creative. But I would say, find your own voice first. It's not only about social media. First you have your band, then you have your songs and then you start the Facebook or whatever. But I think you have to be very headstrong. You have to be sure of what you want and you know; just play, create and enjoy it.

CC: What do you like to do with your free time?

JV: I like to read, a lot. And hang out with my daughter.

CC: Are there some things you do with her to get her to start listening to music?