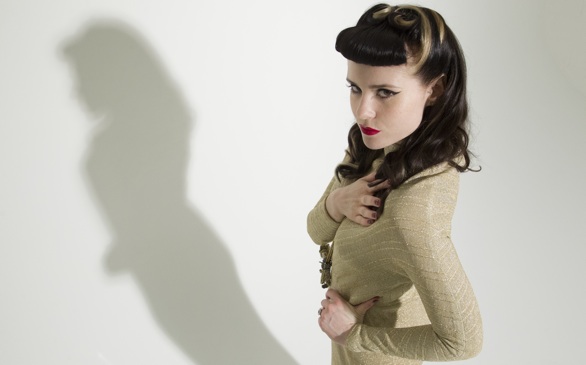 Witness a powerful, edgy Kate Nash at her L.A. show in May and on her new album.
(Credit: Courtesy of High Rise PR)

It had been “one of those years” for Kate Nash. She split from her long-term boyfriend, and her emotions sent her into survivalist mode. Where she’d once sang primly about getting over a bloke by watching “CSI” marathons, she now called upon self-reliance and a hearty dose of feminism. She became like a heroine in a Tarantino film; she became death-proof— an enraged, empowered woman.

Twenty-five-year-old Nash’s metamorphosis comes to life on Girl Talk, out on her own Have 10p Records. There are traces of the English musician’s original piano-pop vibes (the bubbly “Are You There Sweetheart” and the lissome “OMYGOD!”). But on the whole, Girl Talk has a snarl to it. “Sister,” for example, seethes like it should have been on Hole’s classic, Live Through This.

After treating a fan to a day at the nail salon via her Pledge Music drive, Nash hopped on the phone with Campus Circle. She discussed her musical and emotional evolution, as well as her charitable efforts in honor of females around the world.

She noted that “a lot has changed” since the last record, 2010’s transitional My Best Friend Is You (Geffen/Fiction). That release served as a bridge from her successful, perky debut – 2007’s Made of Bricks – to the grit of Girl Talk. It hinted at her desire to break free of the pop princess mold, with the bawdy spoken word of “Mansion Song” and the sultry, throw-caution-to-the-wind number “I Just Love You More.” But even still, Nash feels removed from that version of herself.

But this artist is not one to balk in the face of uncertainty. For one, she picked up the bass for the first time on this album, an instrument she considers as powerful as a weapon. The four-string assault ax found a home with her a few years prior when she did a punky side project called the Receeders with a couple of good mates. Nash said that her lack of formal training freed her up from rigid expectations and eventually led to Girl Talk’s decidedly brash sound.

The album was recorded in Los Angeles with Tom Biller, who’s worked with Kanye West and Fiona Apple. He and Nash intended to meet for a friendly coffee one day last year but ended up hanging out for six hours in his studio, their heads brimming with ideas for her release. He went on to produce, while Nash shacked up with an all-women band in Echo Park. It was the ideal situation for her to embrace her feminism and purge her wounded feelings after breaking up with Ryan Jarman of the Cribs.

“It was fucking one of the most incredible experiences of my whole life,” she said. “I’ll definitely never forget it. It was really amazing.”

Another unforgettable experience she’s recently had was traveling to Africa to support Because I Am a Girl, a charity devoted to bettering the lives of oppressed females. As she shouts of sisterhood solidarity and “action, action!” on “All Talk,” she saw it fitting to join up with the NGO to bring hope to the monetarily and rights-impoverished population.

She recalled the scene with awe and respect: “Ghana was amazing. It was totally crazy…new sights and sounds, like pigpens, like a guy walking down the street with a machete, to a woman carrying a box on her head selling goods like sugar cane.” There are photos of Nash’s journey to Ghana where she is among young natives with fists in the sky, a nod to One Billion Rising, a movement to end violence against women.

Aristotle and Rage Against the Machine agree that “anger is a gift,” and Nash is utilizing this concept for good. Girl Talk could be the 20-teens’ answer to Jagged Little Pill in its refusal to play nice and keep quiet. The anger translates into a stronger appreciation for her fellow woman (she encourages fans to form girl “gangs” to combat sexism). Her anger means survival.

Kate Nash performs at the Troubadour on May 10 and the Echo on May 21. Follow Kate on Twitter @katenash.