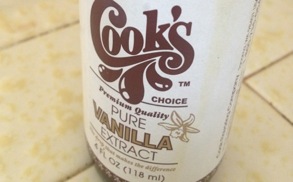 Vanilla isn’t something you usually think of as the vital ingredient when baking, but the right vanilla makes all the difference.

“[Vanilla] blends the ingredients and adds a wonderful sweet touch. The University of Oregon has actually done studies that have shown that we have a special receptor in our brain for vanilla, so there’s no one that doesn’t like vanilla,” said Josephine Lochhead, president of Cook’s Vanilla.

Cook’s Vanilla, a vanilla manufacturer that has been around for almost 100 years, is a leading company in incredible vanilla.

I decided to put this to the test and use Cook’s Vanilla Extract while baking a cake. I baked it just as I usually would and added two spoons of the vanilla extract as instructed.

The outcome? A delicious and uniquely rich cake.

I might just be a great baker (doubtful) or vanilla really does make a difference. Cook’s Vanilla produced a hint of sweetness that really added to the texture of the cake. If you’re going to use vanilla, quality is recommended, and Cook’s makes quality vanilla from what I can taste.

Lochhead answered a few questions for us about Cook’s Vanilla and vanilla manufacturing in general.

Campus Circle: How did your vanilla business begin?
Josephine Lochhead: My grandfather started his own vanilla company 96 years ago and then his son, my father, became a chemist and specialized in the flavoring and chemical aspects of it, which helped it grow. It’s been a family business ever since.

CC: What made you decide to keep it in the family?
JL: The business is a member of the family. I grew up traveling with my dad and learning about it, and then I graduated with a degree in food science. My husband has a degree in dairy science, and then it just became natural that it continues as a family business.

CC: How has the company grown since it began?
JL: In 1980, Cook, who was president of Dreyer at the time, came to us to manufacture a premium vanilla because he knew we were the best in vanilla. Then he passed away, and we bought the retail aspect of it. Retail is new to us and now we have new products that are geared toward the American consumer.

CC: What makes Cooks Vanilla unique?
JL: We grow our own vanilla beans and control everything from the ground up. The secret to good vanilla is good beans. Most beans are picked before they are ripe because the farmers want to get paid sooner and in most countries where vanilla beans are grown, there is a theft problem. We do it ourselves. We have our own farms. We give the farmers a premium and only pick ripe vanilla beans. Our goal is to make the best vanilla. We also cure our beans in the sun over a three-month period and don’t use any pesticides or fertilizers.

CC: What does your vanilla taste like compared to the average vanilla?
JL: It’s sweeter, richer and has more depth. We don’t add any additives or sugars. Most sugarhouses make it from concentrate, but we don’t.

CC: How important is location in growing vanilla beans?
JL: Well, it has to be grown in a tropical climate, and Madagascar has the best vanilla beans. But if you harvest the beans correctly, it doesn’t matter where they’re grown. A good bean is a good bean.

CC: What are your favorite Cook’s Vanilla products?
JL: The puree vanilla extract is the best vanilla. There’s no sugar or additives added, and it’s made from the finest vanilla beans. Almond extract is probably the second favorite, and maple is also a really popular flavor. We also have the orange and lemon lime extracts, which stay fresh for years and are great.

CC: What’s your favorite recipe to use the vanilla in?
JL: Cookies are where I use it the most and an old-fashioned white cake or crème brûlée. I literally go through a gallon a month.

CC: Do you have tips for using the vanilla?
JL: Double up if you can! If it calls for one teaspoon, use two. A lot of the time while baking, we lose a little bit of that flavor so it’s good to add a little extra. When baking with hot items, it causes the vanilla to evaporate, so I recommend doubling the amount when baking.