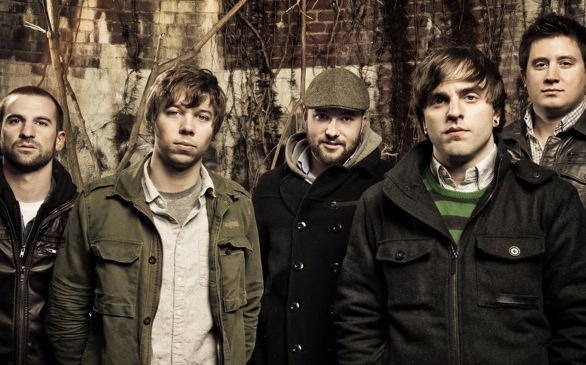 August Burns will be at Van's Warped Tour.
(Credit: Faecbook.com/augustburnsred)

WARPED TOUR LINE-UP AND DATES ANNOUNCED
Headliners for this year’s Warped Tour include August Burns Red, Black Veil Brides, blessthefall, Chiodos, Bring Me the Horizon, Memphis May Fire, Motion City Soundtrack, Never Shout Never, Reel Big Fish, Sleeping with Sirens, the Wonder Years and We Came as Romans. New to the tour will be the Spotify Stage showcasing EDM and hip-hop acts, including Crizzly, Outasight, Wallpaper and Stephen Jacobs. There will not be an Orange County show this year; Irvine is being bypassed in favor of two days at the Pomona Fairplex June 20 and 21. Other SoCal stops are San Diego on June 19 and Ventura on June 23.

MAYHEM FESTIVAL INDEPENDENT ARTIST SCHOLARSHIP
Students considering attending the Musicians Institute College of Contemporary Music in Hollywood can enter a contest to win a scholarship that fully covers tuition and material fees for a two-quarter IAP certificate. The costs of room, boarding and travel to the institute are not included. Entrants should be independent artists working with original material and have a desire to improve their skills in songwriting and recording, and enhance their knowledge of the music business. Applications for the Rockstar Energy Drink Mayhem Festival Independent Artist Scholarship will be taken at www.mi.edu/mayhem-rock-festival until June 1.

THE POSEIDON DANCE PARTY
The Poseidon Dance Party, a highlight of the Long Beach LGBT Pride Weekend, will take place aboard the Queen Mary on May 18. DJs Manny Lehman and Ryan Kenney will spin party anthems and the latest club hits to a choreographed laser show on the ship’s open-air top deck, and partygoers are encouraged to dress in nautical-inspired costumes. Ticket information is at www.queenmary.com, and package deals are available for those who want to book a room and stay overnight.

CDS NEW AND NOTABLE
DEVON ALLMAN Turquoise (Ruf) – Allman is the son of fabled southern rock icon Gregg Allman, but here he puts his soulful voice to work on a set of self-penned R&B-tinged rockers that show he takes after his late uncle Duane as well.

CAYUCAS Bigfoot (Secretly Canadian) – Cayucas leader Zach Yudin is from the California coastal town of Cayucos, so it shouldn’t be any surprise that his lo-fi pop tunes conjure images of fun on the beach and boardwalk.

DAWES Stories Don’t End (HUB) – These L.A. favorites are currently on the road with Bob Dylan, but they’ll be starting their own tour soon and highlighting new songs, including the ode to life-on-an-airplane “From a Window Seat.”

HANDS Synesthesia (Kill Rock Stars) – These synth-poppers are at their best when channeling the dance-oriented British New Wave acts like they do on “The Game is Changing Us” and the Human League-like “Trouble.”

BETH HART Bang Bang Boom Boom (Provogue) – With a voice that’s a mash up of Aretha Franklin and Amy Winehouse, informed by a decade-long (now over) struggle with drugs and alcohol, Hart is now reaping rewards as one of the hottest new soul singers.

OLA PODRIDA Ghosts Go Blind (Western Vinyl) – This Austin, Texas-based band is led by singer/guitarist David Wingo. The band’s name is based on when Wingo was a kid and he had a gig (dressed as a mouse) at the Olla Podrida Mexican market in Dallas. His latest gig playing gentle, rock-tinged folk/pop is a lot better.

PALENKE SOULTRIBE Mar (Soultribe) – The latest from this Colombia-born duo features lots of songs done in traditional Colombian style and sung in Spanish but also an assortment of dubby numbers sung in English, all geared to packing dance floors.

ADRIENNE PIERCE My Heavens (Insectgirl) – Pierce’s husband Ari Shine plays most of the instruments on My Heavens and is careful to never bury Pierce’s Susanna Hoffs-like vocals on charming pop/rockers like “Hand Headed Heart.”

SOFT MACHINE LEGACY Burden of Proof (Moonjune) – Soft Machine was one of the highly influential bands of the early progressive rock era; this version of the group features original and longtime members carrying on their legacy and working in a jazzier vein.

VONDELPARK Seabed (R&S) – This album of lush downbeat and music is perfectly titled; a listen evokes the feeling you might get while exploring an undersea world full of sublime activity that’s normally unseen.