“I Am East Hollywood”: Creating Awareness of the City’s Most Distinguished Culture Hub 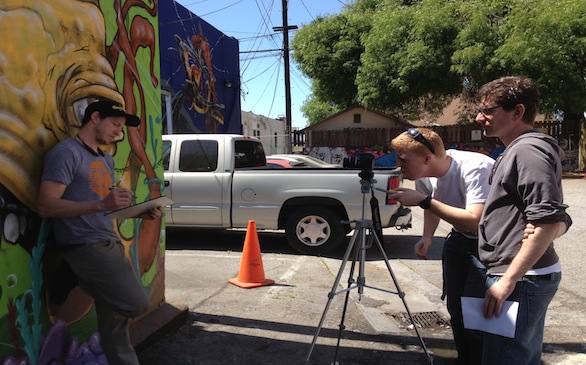 Eric Moore is a candidate for a Master of Communication Management at the University of Southern California. He can be classified as a normal human being and student, but his humble ways have taken him higher than that.

To help his community, Moore, who is a resident of East Hollywood, proposed a special project to his class: “I Am East Hollywood.” Essentially, it’s a campaign that was created with the purpose of generating awareness of East Hollywood’s massive load of ethnic communities, historic site, and eclectic establishment.

“I was the person who proposed the project to the class. We had a number of sketches and then a number of them were chosen based on interest,” said Moore. “I was just kind of throwing it out there to see if anyone else would be interested in doing this type of outreach campaign to share pride in the neighborhood and also bring awareness to all.

“So I'm the leader of the project because of that, but we have a group of five students total, and so we have them all going around, using their communications skills to allow for the project to happen. “

According to Moore, he’s also an elected official on the neighborhood council; twice the public has elected him. They don’t get financial compensation for it, but Moore is gladly serving his second term.

East Hollywood is a small area, without a doubt. But, it carries numerous amounts of residents – all from different backgrounds.

“Demographically, we are the most diverse neighborhood in Los Angeles. This small area is a microcosm of the entire city, so one of the reasons to celebrate East Hollywood is to show people that this area, which to some degree has been neglected by the city, is thriving and has a great community and amazing diversity, cultural events, food, music, and all sorts of diverse local businesses,” added Moore.

“There are also lots of families who've lived in the area for 50, 60 years and all the people who've moved there from New York over the years. It's a very nice mix of a little bit of everything, which is why we look at it as a microcosm of Los Angeles as a whole.”

Events involving art, music and the community are also expected to take place.

“By putting them all in the same boat and showcasing a diverse group of businesses, it gives them an opportunity to come together and for people who don't know how East Hollywood is or haven't explored it to know that it is an active community and get them excited about what occupies these spaces and what the community is about,” said Moore.

“We'll be doing this by having special discounts in certain places. Also, one of the largest music companies in our city is actually located in East Hollywood; it's the largest distributor of Armenian music in the world. We also have a theatre performance based on interviews throughout this project; we've collected a lot of great stories that we want to share, so we did documentary-style interviews and decided we wanted to do a more creative piece.”

Moore is already thinking about the future. He said they’re hoping to make an annual or biannual event out of it so that people can have a chance to explore the community.