Laura Heisler Goes Back In Time 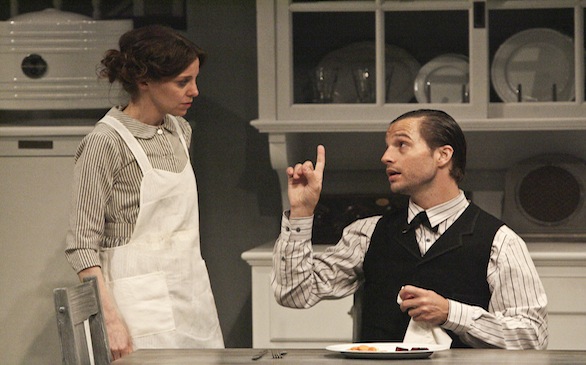 Skillful actress Laura Heisler has been acting since she was a kid. She was born in Chicago, raised in Maryland and now lives in New York, but she’s currently in Los Angeles to play part in “Miss Julie.”

“Miss Julie” runs through June 2 at the Audrey Skirball Kenis Theater in Westwood.

During a phone interview, Heisler spoke about numerous subjects, including her first experience with acting, the storyline behind “Miss Julie,” and the chemistry among the cast, on top of other things.

Campus Circle: How did you first become involved with acting?

Laura Heisler: Since I was a very little kid, I would always play in the costume box. I was putting up plays probably before I knew what a play was. When I was about 7-8, I started doing acting classes and camps, and it just stayed with me. I did children's' plays when I was growing up and school plays. Then, in college.

CC: What brings you the most joy in your profession?

LH: The collaborative process with the other artists, just getting to be in a room with amazing actors and directors. Whether it's an original play or a remake, just having all those ideas bump into each other in a room. I really love it. Also, the exchange between you and the audience; it's new every night, and I love that it involves other people.

LH: This adaptation sets the play in Long Island in 1929 before the market crashed. So the characters don't know this will happen but the audience knows it's only a few weeks away. It's about this wealthy woman named Julie, who has an encounter with one of her servants who's engaged. So it's about this tragic love triangle that arises out of that.

CC: Were there any challenges you faced while preparing for this role?

LH: The normal ones: learning the lines (and) figuring out the role in real time. There was nothing unusual about the process. It was about making sense of what your character's like and how they change throughout the play. We're also under the gun and have to figure things out pretty quickly, like theatre usually is. But it's been a wonderful, collaborative process.

LH: I love it. I worked here this past fall doing another play, and I'm fortunate to have spent this time at the Geffen. I love where they are located. It's a fun environment, very walk-able, a lot of young people, and lots of cool restaurants.

CC: What can you tell us about the wardrobe?

LH: I haven't seen it yet, but because it takes place in 1929, it will be costumes from that era. So like, Great Gatsby-era. I play a servant, and the male actor plays a servant as well so we'll have work clothes, but from that era – that style of clothes.

CC: What are you looking forward to the most in this piece?

LH: Just having it under our belt and learning everything so we can just play. Once you get it under your bones and understand what the journey is, you feel the freedom to explore.

CC: How's the chemistry with the people involved?

LH: It's great; it's a happy room. I think most of us have worked together in the past to some capacity or other. It's very familiar, warm and welcoming. Everyone is on the same page.

CC: Why should people go watch this show?

LH: It's a crazy love triangle. It's an ancient story that's still relevant at this age; these characters are all in their 20s. It's very relevant to present day. These characters discuss their dreams and aspirations, whether it's economically, emotionally, etc., and also what it's like to fall in love with somebody you can't have.

Interview
'Spamalot' hits Bowl with star-filled cast and a joke rewritten for a changed society
2,182 views

Interview
A Convo with 'The Nutcracker' Prince: Mikhael Kinley-Safronoff plays one of the leads in Marat Daukayev School of Ballet's annual show.
4,767 views