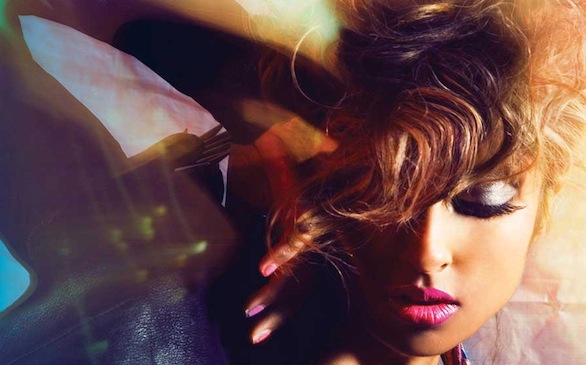 Singer and songwriter Anjulie, who was born in Canada, has experienced many things in her life. Among them is the song, “The Boys,” she wrote for Nicki Minaj and Cher Lloyd’s “Stand Behind the Music.”

Songwriting for other artists is a large aspect of Anjulie’s musical career. She has fun doing that. Her single “Brand New Bitch” is now available via iTunes.

During an interview, Anjulie spoke about her passion of music, musical influences, social media, favorite things about Los Angeles and hobbies, among other things.

Campus Circle: How did you first get involved with music and how did you find your passion for it?

Anjulie: I think my first intro to music was through prose. I started writing poetry when I was very young. I won some poetry contest in 3rd grade. It was about a cat, but I forget the poem. I won some award and then had to present it in front of the entire school. I remember I was terrified, but I also remember being really excited.

CC: Since then, what do you consider your greatest reward of being in the industry?

A: I would say, when my first single in Canada blew up. I played a show there for the first time. I went from playing in coffee shops, hustling in Toronto, to moving to the United States and working on this record. When I went back, the show was packed and everyone was familiar with my work.

CC: How did that make you feel?

A: It was amazing; it just validated everything. I felt validated. As much as artists say they do it for the art, you can only do that for so long. At some point, you need to feel reciprocity from your audience. Otherwise, you're just delusional. It was good to know I wasn't delusional.

CC: Growing up, did you see yourself doing something other than music?

A: When I was growing up, I told my dad I wanted to be an astronaut. Then I went on a plane, and I got really bad ear pressure, and I couldn't deal with it. To this day, it still happens. When I'm flying or scuba diving, same thing happens. I have to chew gum, etc. Despite my love for science, I decided to become an artist.

CC: Can you tell us about your musical influences?

A: I was always very inspired by female singer-songwriters like Nelly Furtado, Alanis Morisette, Lauryn Hill, Missy Elliot, and Janet Jackson. The ones that really told it like it is – ones that were real.

CC: How important is it for you to stay active and interact with your fans through social networks?

A: Very important. I really do try to respond to everyone, unless my day doesn't permit it. I really appreciate my fans. I appreciate that that 'fourth wall' has come down. I was watching Liz & Dick the other day, about Elizabeth Taylor and Richard Burton, and how everything back then was super secretive. And of course there's something to be said about the romanticism of that. But nowadays, that 'fourth wall' has come down, and I'm glad, because you get to directly interact with your followers and build special relationships. They really do become like your friends.

CC: What’s the inspiration behind the single and video for “You and I”?

A: The inspiration behind that was Benny Benassi because he played this track for me before I put my vocals on it. It was the week of Donna Summer's death, and I was inspired by this sort of 70's disco with sweet, emotional vocals on top.

CC: What advice can you give the youth who wish to follow in the footsteps you've taken to enter the music industry?

A: I think it can all happen in different ways. But I think it's important to focus on what you're doing, as opposed to how you get it out. I've always been an advocate of that. There are many distractions. You can be a YouTube star in a minute and then go away. I think it's really important to really develop your craft, whatever it is. If you focus on making your work the best it can be, it's not only fulfilling to you, but people can also appreciate that.

CC: What do you feel your responsibilities are as an artist?  Is it mainly to entertain your fans, or is it also about delivering important messages to society?

CC: What has the city of Los Angeles meant to you?

A: I moved here about 3 years ago. I think it's great.; it's the epitome of the American Dream. However, I do still feel a bit socially awkward here – out of place. But I appreciate the fact that there are a lot of work opportunities. I remember being in Canada in my room with my guitar. I like being around like-minded people.

A: I guess the people. The fact that there are so many creative people, and how there's always something going on; it's exciting.

CC: What do you do in your free time?

A: I like to make juices. I worked at making juices in N.Y. I love making really weird concoctions and just got really into it.

CC: Artists tend to be very fashion-conscious either because they enjoy it, or because the profession often requires it. What does fashion mean to you?

A: It's awesome. My sister works at an office and so has to wear suits, etc. I like the fact that I can wear boots with leopard pants, etc. I really like to be comfortable. I don’t like wearing things that make me feel awkward or uncomfortable.

CC: Do dreams come true or does hard work pay off?