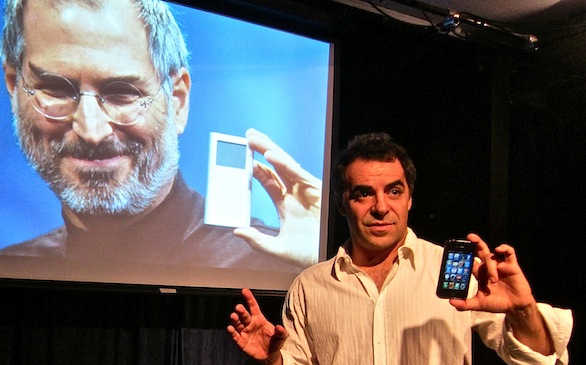 Alex Lyras in "The Agony and the Ecstasy of Steve Jobs."
(Credit: Christina Xenos)

Alex Lyras still manages to use Apple products. After all, they’re some of the best out there. In the theatrical solo piece, “The Agony and the Ecstasy of Steve Jobs,” Lyras makes a strong case against Apple and Steve Jobs in that they’ve wrongfully acted in various ways over the numerous years it’s operated overseas.

The show’s been mostly playing on Wednesday, but it’s added weekend shows here and there. As of now, “The Agony and the Ecstasy of Steve Jobs” will run through June 5 at Theater Asylum.

During an interview, Lyras spoke about his likes and dislikes of Apple and Jobs, among other things.

Campus Circle: How did the concept for all of this originate?

Alex Lyras: This is the first time I did someone else's play. Most of my shows feature more cryptic characters, but I had heard about this play and this style of monologue. So the guy was really curious, spent a bunch of money and went to China on this adventure. It's just amazing how at this day and age, we still don't know so much – take Apple. They are a very manipulative company that portrays itself to be very whitewashed with their advertisements in which everyone's happy, playing with their iPads. To me that just represents how we're being sold things every second of every day – everything's a pitch. So we're at a place where we need to ask ourselves, 'what's really happening?'Also, there are many people who have fought back against Apple for this, upper middle-class people who will say, 'sure, I'll spend another $200 on an iPhone, just tell me it's made here.’ The author is a curious guy, and he knew a bit about the truth. This story had been around for some time. I came to it through my college. They didn't want to hire Mike Daisy after the Mike Daisy scandal and I had done my show up there, and they said they wanted me to be the actor. There are several faculty members involved – a professor from China talked about how things were really like there and some of the business students got involved. It was really fun.  Then I memorized it and took it to L.A.

CC: From beginning to end, what do you think is the most significant portion of the show?

AL: There are two threads that you can't lose. One, is that Steve Jobs changed the world – this was one guy. He had a team of people helping him, but it was one guy.  Amidst all the criticism about Apple, it's important to note that this group of brilliant people kicked him out and then needed him back, and so that's a big moment. The other thing is that we must realize that we are in this future that we've been talking about – where humans are kind of robots. That's why we're walking around with phones in our pocket for $299.00

CC: What’s the experience been like with this particular show thus far?

AL: The more I do this, the more sensitive I am as to how intense it is. When I first did it, I came out after the show, and having been the veteran of three one-man shows, people would always want to talk about it. The accents, how I created everything. After I walk out of this show, people feel like shit. They don't want to go get drunk, so I have learned in rehearsals where the bombs are, and how not to hit them too hard, and you don't want to just slam an audience with information. So my job is to have variation in tone and comedy, and I've also changed the script. It's a pleasure to watch people not fall asleep in the theatre. It's interesting that as the deliverer of this message I am able to detach myself from the fact that I do own an iPhone or an iPad. Because like I said, we're all in the same boat. Awareness is the first step in feeling better about it. Another thing I've noticed is that every time, when the show finishes, people don’t take their phones out right away.

Interview
'Spamalot' hits Bowl with star-filled cast and a joke rewritten for a changed society
2,263 views

Interview
A Convo with 'The Nutcracker' Prince: Mikhael Kinley-Safronoff plays one of the leads in Marat Daukayev School of Ballet's annual show.
4,952 views