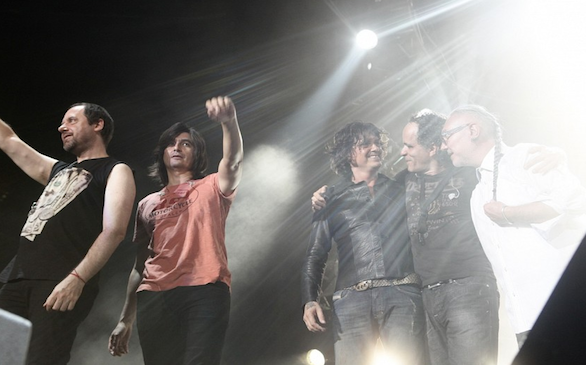 The Spanish rock music band Caifanes was assembled in the late 1980s. Little did they know that they'd influence not only the music industry, but culture as well.

Led by lead singer Saúl Hernández, Caifanes is scheduled to perform on Saturday, May 18 at Nokia Theater L.A. Live. During a phone interview, Hernández discussed his passion for music, musical influences, and the group's upcoming show, among other things.

Saúl Hernández: It comes from when I was very young. Everything has always been music and I remember my mom listening to different types of music. Also, my father listened to a lot of classical music and jazz, and my sister would listen to romantic music. But also, being my oldest sister, she lived through the 60's, and all that was rock and roll and it was her who first introduced me to music by say, the Rolling Stones, etc. That was the genre that attracted me the most; it was the one that truly made me feel free to do what I had in my head. From a very young age, I began to cultivate my curiosity for the guitar, but I will note that I never learned how to read or write musical notation. It always behooved me to decorate my imagination with music.

CC: Did you ever imagine doing anything else with your life or practicing another profession?

SH: Well obviously, I had it in mind to complete school, study and get a degree. But by the time I reached high school, music began to materialize itself more in me. But I did think about history or anthropology. Those really caught my attention.

CC: What have been your musical influences throughout your career?

SH: We grew up in a family nucleus that was very open-minded. My father was always very attentive to the arts and we learned from that. That had a heavy influence on our development, so it was always a strong presence at home. Overall, however, I feel it was an accumulation of important factors, but I've always had a close relationship with my parents. To this day, I'm still treading the path my father laid out for us. There are many aspects of my life I wouldn't have been able to assimilate without his guidance. In those times, trying to become a musician was madness and even more so, a rock musician. It was synonymous with criminality.

CC: What has the city of Los Angeles meant for you and the group?

SH: I feel that Los Angeles is a part of us. I see L.A. as my second home; it is an extension of culture and identities. L.A. is very present in my life.

CC: You perform on Saturday, May 18 (Nokia Theater L.A. Live). What can the crowd expect?

SH: We're going to try and perform all our songs, from all our albums. So we'll do what we know how to do, which is a great ceremonial show and we'll be performing what for us represents what it means to still be together as a band. That's very peculiar.

CC: What’s on the agenda for the next few months?

SH: We have lots of concerts coming up…we'll be touring around Mexico and the U.S. And parallel to that, I'll be working on my solo project. So in essence I'm combining both endeavors.

SH: It's going very well. It's developing in a very positive manner. It's got a very different dynamic because it's a mixture of stuff I've done with Caifanes, Jaguares, among other things. And when I perform them, I perform them from the composer's perspective. They're different arrangements. I've also got the great fortune of working with great musicians.

CC: How important is it to have good communication and chemistry with the rest of the band?

SH: I think it's very important to be able to recognize other musicians' work and dominate your inner demons. The ego is very big and stupid, yet clever at the same time, and so it can distract you. It can take you on very stupid paths, so once you can conquer those demons, you can begin to appreciate what others do. Also, your own work is reborn and gets better. Basically, respect is very important in any band, in any situation.

CC: What do you do when you have free time?

SH: I love spending time with my family and doing home activities. I also like working with my guitar and looking for songs, and composing.