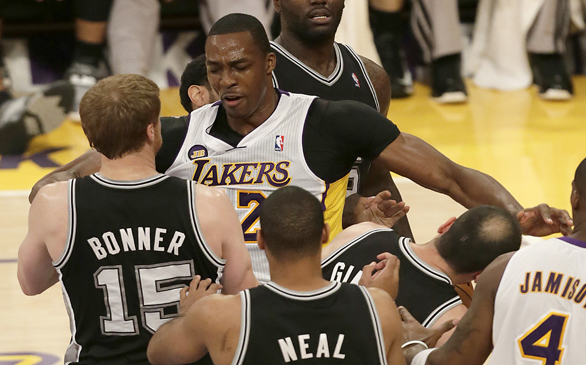 His exit from the Los Angeles Lakers' season was as regal as his entrance, Dwight Howard surrounded by screams and gasps as he swaggered through the Staples Center tunnel into the shadows of summer.

Problem was, the season wasn't done. The game wasn't finished. There were still 9 minutes 51 seconds remaining in the third quarter. There were still thousands of fans in the stands and the last trudging steps of a difficult journey to be completed.

When his team needed his leadership most Sunday, Howard's mouth earned him a second technical foul and ejection from a loss that swept the Lakers out of the playoffs, a 103-82 defeat to the San Antonio Spurs.

Here's how that nightmare can end. The Lakers don't re-sign it. The Lakers walk out on Dwight Howard the way he walked out on them. The Lakers shake themselves awake after watching Howard's pathetic performance Sunday and have the courage to move forward without him.

Interestingly, just as the Lakers' phony glitter disappeared, their strongest fabric arrived. Moments after Howard's ejection, with the team trailing by 21 points, yeah, you guessed it, Kobe Bryant showed up.

Making his first public appearance since tearing his Achilles tendon just over two weeks ago, Bryant hobbled out to the chair behind the bench. The crowd stood and roared for the first time all afternoon. Bryant sat there the rest of the game, cheering and coaching.

This franchise may be a mess, but it's still Hollywood's mess.

There is no evidence that Bryant's arrival on the bench was anything more than an inspirational coincidence, but insiders say Bryant wasn't thrilled with Howard's behavior, and the perceived message was clear. Dwight may quit on Lakers fans, but Kobe never will.

When Howard begins negotiations with the Lakers on a contract that could pay him $118 million, the Lakers need to remember that message. They need to remember how, in a game in which they were swept out of the first round of the playoffs for the first time since 1967, the presumed new face of the franchise covered his eyes and bowed his head.

Not to mention, left his teammates alone to absorb a beating so embarrassing, even San Antonio coach Gregg Popovich said, "Obviously, it wasn't a fair fight."

You'd think for $118 million, you'd be able to buy a fair fight, or at least more than two shots in an elimination game, or maybe fewer than 16 turnovers in a four-game series.

Pau Gasol could be sent packing to make room for Howard's salary, yet he battled to the end Sunday, leaving the game only by order of his coach in the final minutes while the crowd jumped to its feet in a loud and belated appreciation.

"I wish he didn't get ejected so ... he would have stuck all the way through with the team," said Gasol of Howard.

Mike D'Antoni could also be sent packing to make room for Howard's whims, yet the coach also fought to the end, marching up and down the sidelines even as, during one rare moment when the booing and grumbling quieted, a fan wagged a sign reading, "We still want Phil."

"I'm sure he's disappointed in himself," said D'Antoni of Howard. "I felt sorry for him. If you watched, he just gets beat and beat hard."

One might feel more sorry for Cory Joseph, the Spurs player who was on the business end of Howard's elbow, resulting in the first technical foul.

The second technical occurred seconds after Howard lost the ball for the fifth time, with Howard screaming more out of frustration than fact.

"I've got to do a better job of keeping my cool," said Howard. "It's very tough, you're out there playing most of the game, I don't want to lose, and sometimes when things don't go your way, sometimes you react the wrong way and I just got to keep my cool."

All true, except for the part about him playing most of the game, as he was on the court for just 20 of the 48 minutes Sunday, while playing fewer minutes in this series than Gasol and three Spurs starters.

A growing process? The Lakers don't need to rebuild their franchise around someone who admits his concrete is not yet dry. Howard's ejection Sunday was symbolic of a season that revealed a player who is simply not prepared to be the sort of leader that the NBA's greatest franchise requires.

The Lakers need to show the fortitude that Howard lacked Sunday and let him walk to Dallas or Houston or wherever the expectations will be lower and the pressure less.

Even with Howard, they would be mediocre next season, so why not play without him while waiting for the contractual freedom in the summer of 2014 that could put them back in the championship race.

Granted, once Bryant retires, the Lakers will never again be led by such a great closer. But you'd think they'll eventually be able to find someone actually willing to finish.