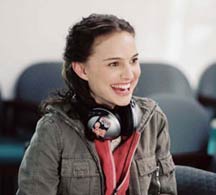 After making her film debut as 12-year-old Mathilda, an assassin’s apprentice, in Luc Besson’s The Professional, Natalie Portman has risen among the thespian ranks to become one of Hollywood’s most promising young actors. At only 23, Portman’s resume spans the theatrical gamut from comedy (Mars Attacks!) to drama (Anywhere But Here) to sci-fi/ action (Star Wars: Episodes I and II) — the latter of which has made her face one of the most recognizable on the planet. Portman, however, sees other worlds to conquer.

Portman creates some comedic special effects of her own as Sam, a quirky compulsive liar with a big heart and "carpe diem" outlook on life, in the character-driven generational comedy Garden State. The film, which co-stars "Scrubs" star Zach Braff (who also serves as writer/director) and Peter Sarsgaard (Shattered Glass), is set in a small, New Jersey town. And it’s in this town that Sam becomes friendly — first platonically and then romantically — with the film’s protagonist, Andrew "Large" Largeman (Braff), a TV actor/waiter returning to his hometown after 10 years for his mother’s funeral. In his hurry to get home, however, he forgets all of his prescription antidepressants.

"I can always tell when I’m reading a script, if I start saying the lines while I’m reading it, that it’s something that I’m really excited to do. Because I can’t even wait to start hearing what it sounds like," Portman says of her instant intrigue with the Garden State script. "It was really exciting, really fun to see a character that was so uninhibited."

Unlike her portrayal of the stoic Senator Amidala in the Star Wars prequels, Portman was given the chance to cut loose with her Garden State role. "You know, it took a lot of letting go. I guess because I’m someone who’s a little more reserved," admits Portman, "but it was fun. I think there’re people who think I’m always so serious because I always end up talking about school and being nerdy and lame. But I’m [also] into laughing and having a good time!"

Portman describes her experiences working with fellow cast member and first-time director Braff. "He was just so confident and relaxed for a first-time director. It was really very impressive because we always knew who the leader was. We clearly had a guide, but he really was so loose about his style. It turned into a real team feeling."

Garden State is a much smaller project in comparison to many of the films — most recently Cold Mountain last December — that Portman has done in the past, but, as the old saying goes, size really doesn’t matter. "I like doing different things. The best thing is to just vary your experience and challenge yourself in different ways," she says.

"In a big film you have enough time and money to take as long as you want," continues Portman, "then as an actor you end up spending like two hours in your trailer looking at the ceiling. Then you have to come back and act. It’s one of the biggest challenges on those types of films — to keep yourself as stimulated, involved and as focused as you are [in the scene]."

Although the cast and crew of Garden State is primarily composed of twenty-somethings behind and in front of the camera, there really wasn’t a lot of navel-gazing on the set. According to Portman, it was just the opposite.

"In this kind of film you just have to keep shooting. It’s much better to stay out on the set between takes and hang out," she says with a smile. "I think you feel that energy in the movie too — it’s just a bunch of friends hanging out."

Garden State is currently in theaters.