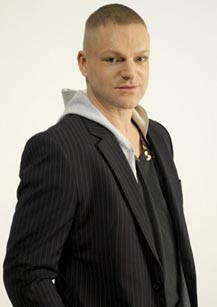 In the 1980s, Erasure singer Andy Bell was one of the first pop stars to come out as gay.

In the new millennium, he has become one of the only pop stars to come out as being HIV-positive.

Though the singer has known his health status since 1998, he decided to discuss it publicly only in recent months, after murmurs began reverberating around Internet chat rooms.

"On the last tour we’d postponed a few shows, and rumors started flying around," Bell explains. "I didn’t want to be making excuses all the time."

Also, says Bell, "I’m hopeless at keeping secrets. That stems from being such a good liar when I was a teenager. I thought, all this will get me into terrible trouble one day if I don’t stop."

Instead, Bell became a fairly relentless truth-teller, developing one of the most flagrant images of any major gay pop singer.

Bell extended that legacy, when he kicked off the band’s latest tour by prancing around on stage plastered in fairy dust and festooned with angel wings.

He and his partner in the band, Vince Clarke, played10 dates at New York’s Irving Plaza – a record for the club.

"One night at The (Madison Square) Garden would have been easier," Bell says. "But this way we create a stir."

It doesn’t hurt, stir-wise, that the group is staging its high-profile stand at a time when music influenced by their original era is experiencing a renaissance.

Anyone looking for a retread of Erasure’s ’80s synth sound can hear whiffs of it in groups like Fischerspooner, the Scissor Sisters, Ladytron and more.

Such groups have also nicked some of Erasure’s theatricality – though at the current run of shows, Bell says he’ll break one tradition.

"I won’t be wearing any dresses this time," he cautions.

No high heels, either – not since he had to endure a double hip replacement last year.

The 43-year-old Bell says his doctors told him it was not related to either HIV or the drugs he uses to combat it.

With typical pluck, Bell describes his recovery from the surgery as "quite a good experience, actually. In rehab I got to hang out with old ladies. They have different stories to tell."

So does Bell, given his role as a driving force behind what became a full trend in British pop stars coming out in the ’80s. They included Jimmy Somerville, plus the other members of Bronski Beat, Boy George, Soft Cell’s Marc Almond and several guys from Frankie Goes to Hollywood.

Other prominent English pop stars of that era were also gay – including George Michael and the Pet Shop Boys – but none talked about it until far later, when the attitude toward gay people had greatly evolved.

"I used to laugh and bitch about" those who weren’t out, Bell says. "It was quite annoying."

Not that all gay people are happy with Bell’s flamboyance, which hardly breaks any stereotypes. "One gay San Francisco paper voted that I should go back in," Bell laughs.

Bell’s musical brother, Clarke, is straight and recently married. (Bell has been partnered for years). Together, the friends have kept their group going for two decades – though their hitmaking days are long gone.

Erasure’s latest album, Nightbird, hasn’t made much of a splash here. But the group remains a significant concert draw.

Despite the band’s rough touring schedule, Bell says his HIV status hasn’t worn him down. The band’s insurance, however, has shot up due to his condition.

Bell wants his fans to know he’s feeling fine – and that he feels as good about being open about his HIV as he was about his sexual identity.

"It’s a relief," he says. "You don’t have to keep coming out. Your calling card is stamped."