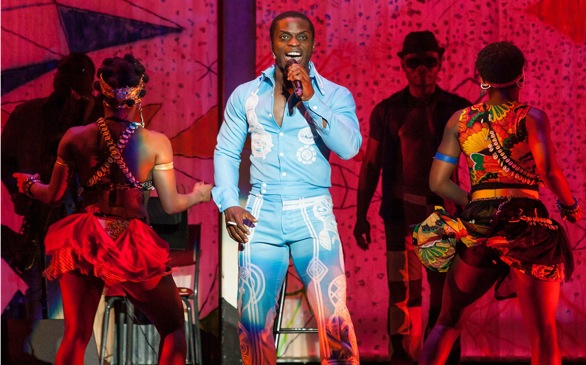 If you didn’t have the chance to catch one of the most exciting musicals, “Fela!” on Broadway, then here’s your chance. Touring for the second time throughout the country due to its immense popularity, the show has hit the L.A. stage at the Ahmanson Theatre through May 5. Directed and choreographed by the famed Bill T. Jones and brought to life by big name producers Jay-Z, Will and Jada Pinkett Smith, this show is not one to miss!

Based on the life of legend Fela Anikulapo Kuti, this performance takes you on a musical and historical journey. “Fela!” transforms the Ahmanson Theatre into the Afrika Shrine, Kuti’s celebrated club, where he performed daily in Lagos, Nigeria. You are drawn into the ‘70s with Fela, played by very talented Adesola Osakalumi, where he encourages the audience to participate.

Osakalumi as Fela tells the story of his early years and the influences that helped him become one of the most celebrated and seminal musicians of the world. It takes place on one final night at the Shrine, where he fights his oppressors in the Nigerian government and military.

As he tells his story, Kuti has flashbacks and talks about the inspirations in his life. Two powerful models for Kuti were his political activist mother Funmilayo, played by Melanie Marshall, and American Black Panther activist Sandra Isadore, played by Destiny Child’s Michelle Williams. On stage with a live Afrobeat band and the “Queens,” his dancers, the show pulsates from start to finish.

It can feel at times like you are being transported to that era in the middle of all the social and political changes happening in Nigeria during the ‘70. We see the genesis that makes Kuti begin to use his music as a weapon to fight back and be the people’s voice. The production has constant high-energy musical numbers combined with intense African dancing that exhausts you just by looking! Popular songs like “Zombie” are followed by slower ballads that push you to understand the gravity of the situation around Fela.

Some of the original cast members from Broadway have stayed on to tour, and there are some new faces that have joined the cast. Williams from Destiny’s Child has received the most notoriety, but somehow she falls a bit flat. She has the voice to carry the part; however, her dancing is stiff and mechanical. Unfortunately, she doesn’t command the attention that is needed.

Nevertheless, her dancing does not take away from the show as a whole because the ensemble cast is so strong, and Osakalumi has such a dynamic stage presence. The music literally brings you to your feet, moving you to the beat.

The takeaway from a show like this can be a learning experience disguised as pure fun. It can open the eyes of a younger generation, making them see and understand a time and place they weren’t aware of before.