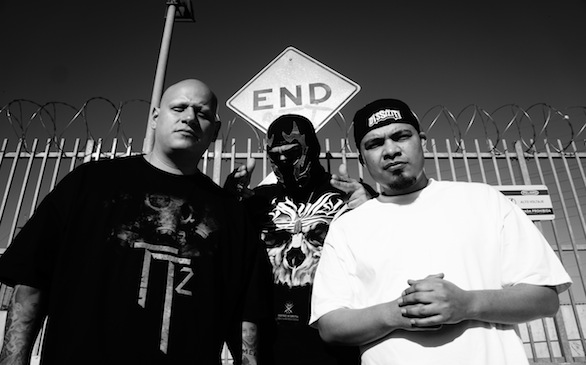 Sick Jacken sports many traits: creativity, originality, talented in both songwriting and rapping, and other things alike. Interestingly enough, however, his humble ways are what unarguably separates him from others in his genre and, to some extent, within this industry.

Born Joaquin Gonzalez, Sick Jacken is one of two people to have founded Psycho Realm, an Los Angeles-based hip hop group formed in 1989. The other person is his brother Gustavo Gonzalez, known as Big Duke.

To celebrate Cinco de Mayo, Psycho Realm is scheduled to deliver a distinguished performance on Sunday, May 5 at Club Nokia at L.A. Live. Psycho Realm's music became a part of the movie soundtrack from the movie Tattoo Nation, which is releasing on DVD May 9. Tattoo Nation, which is now available for pre-order via Facebook, is a documentary that follows three pioneers -- Charlie Cartwright, Jack Rudy and Freddy Negrete -- who revolutionized the world of tattooing.

During a phone interview, Sick Jacken talked about "Psycho de Mayo," the return of his brother to the music scene, upcoming agenda, and social media, among other things.

Campus Circle: How do you feel about performing on the upcoming ‘Psycho de Mayo’ festival?

Sick Jacken: I’m excited about ‘Psycho de Mayo’ because it’s the first time that this festival is done. It’s kind of a celebration of the Latin music, whether it’d be hip-hop, Spanish rock, or reggae. It’s a celebration of the music that we make. I’m happy to be a part of it. It’s going to be Psycho Realm, 2Mex, The Gods of Chaos, Quinto Sol and Disciples of the Sick. We’re going to have a pretty good line up. Every year from now, we just need to build and build it for it to be a bigger and better festival. Hopefully, we can then begin to the 5,000 plus-people festivals that are done out here.

CC: Your brother, Big Duke, is making a return to music. What does that mean to you?

SJ: I’m happy that my brother still has a hand in music. I’m one of his biggest fans, and I think he’s really talented in what he does. He just kind of switched over to more of the production side of things. He still heavily involved in the concept, in the entire process of the recording and the direction of the music; I think that’s where his talent is big – aside from being an incredible writer and vocalist. When he was with Psycho Realm, that’s where he contributed the most: concepts, ideas, and direction of the records. I’m just glad he’s still doing it and pushing forward. I heard the record that he did with Block McCloud for The Gods of Chaos, and it’s a great one. He’s not going to disappoint the fans that have been waiting to here something from him. Even though he’s not going to be on the songs vocally, his presence is definitely going to be felt.

CC: How did the collaboration to appear on the movie soundtrack of Tattoo Nation originate?

SJ: I saw the documentary. I think they did an excellent job of capturing the history of the great art form of tattooing. It moves real nice; it’s very entertaining and very educational, too. I met John Corry, who produced the film. He was told that our music would be good music for the soundtrack of the film. When John heard the music, he instantly fell in love with it. He decided to end up using our music for the film, and that’s a big honor for us to be part of such a great film…it’s just great to be a part of that. Being that tattoo culture is so huge right now, it was very important. I’m just happy to be a part of it.

CC: What’s on your agenda for the coming months?

SJ: Right now, I just got off tour. After this ‘Psycho de Mayo’ show, I’m just going to hit the studio. I have to record a new album. I’m doing my first solo album, and it’s in English. I want to do one in Spanish as well…I’m just trying to hit the studio a lot before we hit the road again in August – just trying to buckle down and get that going, developing that merchandise and keeping the machine going as long as we can.

CC: What advice would you give youngsters who are struggling to pursue their dreams of entering the music industry and need some type of motivation?

SJ: I think the motivation should be there for the passion of this art form. There’s a big misconception out there because people think you can just go out there and get a record deal like it was in the 1990s and early 2000s. That’s not the case anymore. There are groups that are growing and making noise themselves; they’re the ones promoting themselves on the Internet and the power of it to reach people around the globe. That’s where the talent is being developed and where the fan base comes. And when the fan base comes, that’s when record labels are going to be knocking on your door. My advice to them is just to be careful and make sure you just jump in. Nowadays, we have a lot of power in our corners as artists because the infrastructure is a lot different now. Pursue your dream as long as you can.

CC: What does social mean to you, and do you utilize it not only to interact with fans, but also to keep them informed of happenings and updates with regards to Psycho Realm?

SJ: I think social media is the instant messenger of a website. A lot of artists have websites, but fans prefer to go to their Facebook and Twitter pages because it’s a lot faster. It’s quicker to get information and exchange information. You can associate yourself to your favorite artists in a matter of minutes. We utilize to update fans and keep them inform on everything. Every time fans write to us, I try to respond to everybody. I try to give them the insight on when we are on tour or in the studio, things like that. I think those are very important tools, and they’re free.