Susanne Bier Discusses Love Is All You Need, Pierce Brosnan 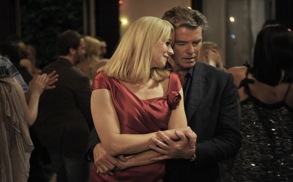 Trine Dyrholm as Ida and Pierce Brosnan as Philip find romance in Love is All You Need.
(Credit: Doane Gregory, Courtesy of Sony Pictures Classics)

Is love really all you need? Well, after watching this film, you can bet your answer will be “yes.”

Danish director/writer Susanne Bier’s Love is All You Need is a film that uses humor and romance to carefully depict the hardships that come with death, sickness, betrayal, self-identity and, of course, love.

In the film, Pierce Brosnan plays Philip, a no-nonsense, lonely businessman who is emotionally isolated from others. Ever since his loving wife died years ago, he’s determined to be angry with everyone, remain unhappy and ignore other women’s advances (including his dead wife’s sister’s constant flirting).

When Philip arrives at the airport to go to his son’s (Patrick, played by Sebastian Jessen) wedding in Italy, he literally crashes into his soon-to-be daughter-in-law’s (Astrid, played by Molly Blixt Egelind) mother, Ida (played by the beautiful Danish actress Trine Dyrholm).

Ida recently found out that her husband (Leif, played by Kim Bodnia) of many years has been cheating on her with a younger woman while she has been battling breast cancer and enduring chemotherapy. Leif leaves her, and she travels to Italy alone to see Astrid get married. Shaken and heartbroken, yet still positive, she is a frazzled mess when she backs her car into Philip’s.

In the beginning, Philip seems to be put off and annoyed by Ida; however, he soon finds himself falling for her as they spend time together at his Italian house where most of the family members are staying for the wedding. Ida, on the other hand, sees Patrick as rude and stupid at first. But alas, she too finds herself dealing with conflicted feelings of love, yearning and loneliness.

Although, Philip and Ida’s story is the film’s main plot, the other characters deal with dramatic issues as well. In Love is All You Need, devastating secrets are revealed, and all of the characters are forced to face reality as the wedding gets closer and closer. Every character learns that there are pains as well as joy that come with moving on and moving forward.

Bier is no novice at making outstanding films.  After all, she did win the Oscar and Golden Globe in 2011 for Best Foreign Language Film with In a Better World. At a recent press junket, Bier sat down and talked about her vision of the film and how they chose Brosnan as the leading male:

Q: Pierce [Brosnan] has never shied away from the subject of breast cancer since the death of his [first] wife [named Cassandra Harris]…did you know [Brosnan] well enough to [send the project] to him or did he show interest? How did it come about?
A: It started the other way around. We had written the script, and we had this wonderful main character [Ida] that was very, very positive and by the beginning of the movie, she feels like she’s lost everything. We were having fun talking about it and speculating, “For this character, who would we want her to meet?” We wanted her to meet James Bond. Then we came to Pierce Brosnan, and we sent him the script. As soon as the thought popped in my head, it was going to have to be him.

I sent him the script, and that was before I really knew that much about him. I was due to talk to him on the phone, and I read up on him, and then of course I realized [that] he had this history of his first wife passing of cancer. I told him in our first conversation (before he read it), “You might find that it’s close to you, but you also might find that because it’s light in its tone, it might be interesting for you to have [his wife’s passing] as a background but not as something which is defining the entire character or the picture.”

Q: Is [the film] based on someone particular?
A: My mother has had breast cancer twice, and she is a very, very positive, kind of hopeful lady. She would at all times figure out something positive to say like, “The nurses are very nice,” and things like that. So, it’s mildly built on her or a little inspired by her. Of course, it’s not her story…

Coming soon to a theater near you!