The Killers: May 1 @ Honda Center 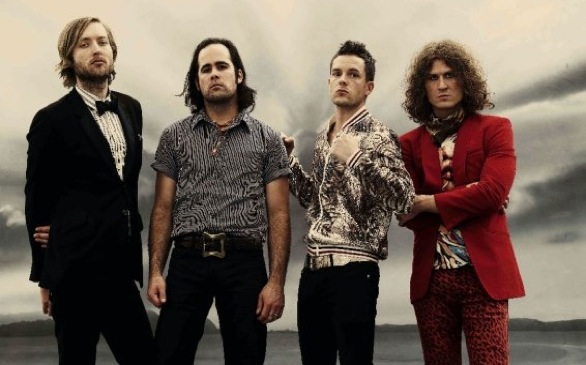 Continuing their second stop of the North American “Battle Born World Tour,” The Killers took the stage in Anaheim before an enormous crowd.

Kicking off the set list was one of their massive radio hits, “Mr. Brightside,” that included house lights as a subtle accent to their heavily armed tools of pyrotechnics, lasers and strobes. The crowd became overwhelmed with instant adrenaline and within minutes, the Honda Center transformed into an acoustic setting for sing-along lyrics. As the night continued, the house lights vanished and a visually impressive digital backdrop projected clouds, fields and multiple image effects along with rotating lasers that alternated colors.

Lead singer Brandon Flowers stood tall behind his signature neon lightning bolt microphone stand, rotating it back at forth as he traveled from coast to coast on stage, reaching fans from a far. Surprisingly, their well-known musical hits arrived early in the set list. For example, they performed “Smile Like You Mean It” within the first 30 minutes. Audience members erupted with joy, waving their hands in the air. Others continued the intolerable trend of recording videos and taking pictures as a distraction. Still, with enough intensity and excitement to last until sunrise, The Killers continued their stellar set, adding tracks from all albums.

To please the home crowd, Flowers acknowledged the Anaheim Ducks making the playoffs and gave credit to Emilio Estevez for his coaching abilities. Clearly, Flowers’ reference traveled back to the early ‘90s, poking fun of the The Mighty Ducks franchise film trilogy, which displayed his attempted puns and zinger jokes throughout the night.

The Killers shed light onto their latest album release Battle Born and played the second single “Miss Atomic Bomb,” which the crowd warmly received. That marked the second song off the new album with “The Way It Was” performed prior.

For those that preferred the classic hits, Flowers asked the audience if they were ready to dance. Specifically, Flowers asked if everyone in attendance arrived with their dancing shoes. As the cheers grew louder, “Human” began. The tempo took a step back, but much as anticipated, the dancing was obvious. As the song came to a close, pandemonium took over the arena due to the brief transition of “Somebody Told Me.” Easily one of their most versatile hits, everyone shouted the chorus and made special use of those dancing shoes. The production spared no expense, displaying mild pyrotechnics by drummer Ronnie Vannucci Jr. and confetti with “K” symbols and lighting bolts.

After a short recess, the Las Vegas four-piece returned for their encore performance that included “When You Were Young” and the closer “Battle Born.” The Killers performed a little passed 90 minutes, delivering 20 songs before a near sold-out crowd.