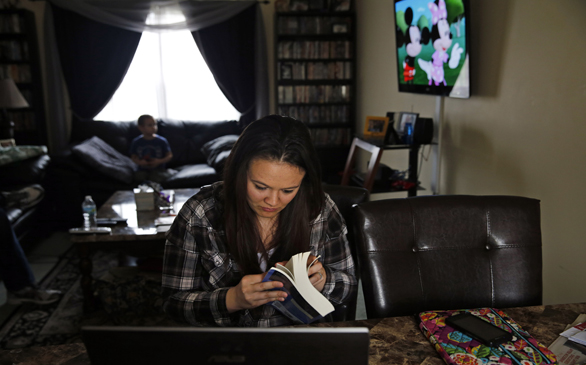 While Jennifer Clay was at home taking an online exam for her business law class, a proctor a few hundred miles away was watching her every move.

Using a webcam mounted in Clay's Los Angeles apartment, the monitor in Phoenix tracked how frequently her eyes shifted from the computer screen and listened for the telltale sounds of a possible helper in the room.

Her computer browser was locked - remotely - to prevent Internet searches, and her typing pattern was analyzed to make sure she was who she said she was: Did she enter her password with the same rhythm as she had in the past? Or was she slowing down?

In the battle against cheating, this is the cutting edge - and a key to bolstering integrity in the booming field of online education.

Only with solid safeguards against cheating, experts say, can Internet universities show that their exams and diplomas are valid - that students haven't just Googled their way to an "A-plus" or gotten the right answers texted to their smartphones.

"I think it gives credibility to the entire system, to the institution and to online education in general," said Clay, 31, who is studying accounting at Western Governors University, a nonprofit institution that enrolls many working adults like her.

But defeating the ingenuity of computer-savvy students is a huge challenge that has attracted much investment and attention in the last year. The whole system can be corrupted with something as low-tech as a cheat sheet tucked out of camera sight.

"Online courses are under scrutiny to show evidence of integrity in ways that face-to-face courses aren't," said Teddi Fishman, director of the International Center for Academic Integrity at Clemson University in South Carolina.

William Dornan, chief executive of Phoenix-based Kryterion Inc., which monitors tests for several schools and companies, said technology is up to the task. He contends that his webcam system reduces cheating far below its occurrence in regular lecture halls.

"Security is incredibly important," he said. "If it's known you can cheat, that completely dilutes the brand."

Some students say no security measures are fail-safe.

University of California, Santa Cruz, sophomore John Shokohi took a water issues class last spring that allowed webcam proctoring in his dorm. The 19-year-old environmental studies major said he did not know of specific cheating, but added that online education was a tempting target for desperate students.

"Because you are not around other students, you are not so worried about people watching you or getting caught," he said.

Although online classes have existed for more than a decade, the debate over cheating has become sharper in the last year with the emergence of "massive open online courses."

Those MOOCs, as they are known, usually are offered free by such organizations as Coursera and edX in collaboration with colleges, and can enroll thousands of students in one class.

Private colleges, public universities and corporations are jumping into the online education field, investing millions of dollars to tap into the vast pool of potential students, while also taking steps to help ensure honesty at a distance.

Despite public suspicion about online deception, studies seem to show that there is not much difference in the amount of cheating that occurs in virtual and real classrooms. A 2010 study in the Online Journal of Distance Learning Administration found that 32.7 percent of online students self-reported cheating at least once on tests, compared with 32.1 percent of those in on-campus classes.

The "size and scale (of MOOC courses) make it a bigger issue," said Cathy Sandeen, vice president for education attainment and innovation at the American Council on Education.

The council announced in February that it considers four MOOC courses from Mountain View, Calif.-based Coursera worthy of college credit when they include webcams and monitoring of typing patterns.

"The (security) standard we want to see is something equal to or better than a large lecture class at a university," Sandeen said.

Aside from the Web cameras, a host of other high-tech methods are becoming increasingly popular. Among them are programs that check students' identities using obscure biographical information (which of these three telephone numbers was once yours?).

Programs can generate unique exams by drawing on a large inventory of questions and can identify possible cheaters by analyzing whether difficult test questions are answered at the same speed as easy ones. As in many campus classes, term papers are scanned against massive Internet data banks for plagiarism.

At Salt Lake City-based Western Governors, nearly all 39,000 students have been supplied with Kryterion webcams to monitor tests and scan the room for visitors or cheat sheets.

If the proctor senses something suspicious, the test can be interrupted or canceled, according to the school's provost, David Leasure. A webcam detected the presence of a Los Angeles Times photographer in Clay's apartment before the student could proceed with the exam, which she passed.

StraighterLine, a Baltimore company that offers online courses accepted for credit at some colleges, switched in November from optional test proctoring to mandatory use of webcams. That added $10 to students' cost per course.

"We made the change because we believe that the academic integrity issue is likely to become a big issue across all elements of higher education," Chief Executive Burck Smith said.