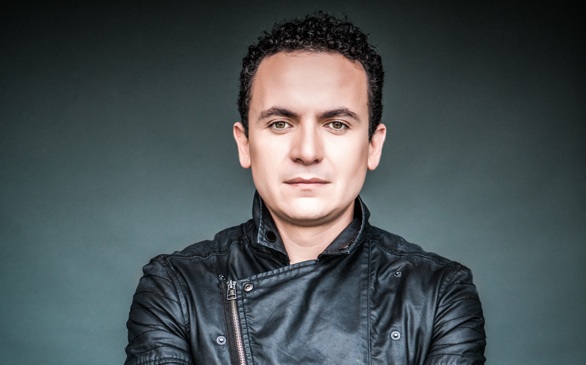 Fonseca will be gracing the stage at Club Nokia later this week.
(Credit: Pablo Garcia)

Three-time Latin GRAMMY winner singer and songwriter Fonseca blends tropical genres like no one else within the industry. The 33-year-old Colombia-born music gem was honored for that in late 2012, as he earned the Latin GRAMMY Award for Ilusión in the category of Best Tropical Fusion Album.

Currently on tour within the U.S., Fonseca managed to grant a phone interview to Campus Circle. He talked about his GRAMMY experiences, time as a student at Berklee College of Music and more.

Campus Circle: In 2012, you won a Latin GRAMMY Award for Ilusión in the category of Best Tropical Fusion Album. How did that feel?
Fonseca: It was very exciting because it was a year full of hard work, especially arranging the album's release in the U.S. and all of Latin America. We had a great team with Sony Music helping us out, and it touched a lot of personal factors for all those involved. So all in all, this Grammy represented a lot of different things. I would say the best thing about it was the category we won in because it was the best description for the album: tropical fusion. And I'm glad people accepted it that way.

CC: This year, you were also nominated for a GRAMMY for Best Latin Pop Album. What does it mean to you to be recognized in that market?
F: It was equally exciting as the Latin nomination, and in ways, more unexpected. I didn't even know when the nominations would be announced, and it made me very happy. I was elated to be in the company of so many people I admire; it was something very beautiful and very special, and I was glad to have been able to share that night with Juanes, who's a very good friend of mine.

CC: For several weeks now, the song “Desde Que No Estás” has been on the Billboard Top 10 in tropical music. What’s your take on it being such a popular tune?
F: It's been great. Also, to sing about someone being your dream is very important as a singer. I'm happy because we're about to go on tour, and our aim is for people to get to know the songs.

CC: The video for this track was filmed in the Guajira, north of Colombia. Why did you choose that location, and what can you tell us about the concept for the video?
F: The concept of the video came from the song, which is very melancholy, and we thought about a place that would invoke that melancholy feeling – that nostalgia. So we decided a desert could achieve that. The Cabo de la Vela is a magical place in Colombia because it hosts all sort of landscapes, and it’s a place full of contrasts. Also, I like to use video to show the world the beauty Colombia has to offer, so it was a bit of all these factors.

CC: Your U.S. tour ("Ilusión World Tour") is soon coming to Los Angeles. Particularly pertaining to your performance here (Club Nokia, May 9), what will the show entail?
F: We’ve been very selective of the material we'll be using on this tour. For us, the U.S. tour is very important, and we look forward to visiting some of those cities again. The last tour included 17 cities, and this time around it's going to be about the same…We've been preparing for a long time, and so we'll all be having a great time.

CC: What does your partnership with Marca Colombia on this tour mean to you?
F: It symbolizes a message we wish to convey, and I feel fortunate to be able to do this. We've already done it in two previous tours. This time around, we wish to share with the world what Colombia is all about. We want to promote the brand and highlight who were are, what we're all about and the beauty Colombia has to offer. For me as an artist, it has always been very important to tell the world where I came from, etc. We're also partners with Avianca, and we're very happy to have them along.

CC: When you're on tour, do you have any techniques to help you relax?
F: Well while on tour, my mind's always on the task at hand: on what's the next show going to be like and what we might need to improve. That's very important. That said, we do try to relax when we can. Last year, on our way from Dallas to Las Vegas, we stopped by the Grand Canyon and took a helicopter ride, and other things like that. We try to enjoy the cities we visit as much as possible; that's part of what it's all about.

CC: Overall, your repertoire is full of romantic themes. Where is it that this romanticism comes from?
F: It comes from life experiences, and it might give people the wrong idea about me being like this every single day. But music has always been a way of escape, a way of expressing things I don't necessarily express in my daily life.

CC: You attended Berklee College of Music. Discuss that experience and why you left when you did to focus on your career?
F: I took a course for singers there, and my experience there was incredible. It's a great place that's very open to what you have to offer. It's a place where you can arrive with whatever form of musical expression, and they have people there ready and waiting to help you develop. Many music schools are specialized, whether it'd be classical, jazz, etc. But Berklee it's open to any genre, and it was perfect for me because I was able to focus on what it's actually like to be a singer and being on stage. It was an incredible experience.

CC: You now live in Miami now. What do you like most about that city?
F: I love Miami; it's very laid-back. I have a daughter, and the city is very child-friendly. I have many great friends there and from a professional standpoint, it's a great place to be.

Fonseca will be performing at Club Nokia in Los Angeles on Thursday, May 9.