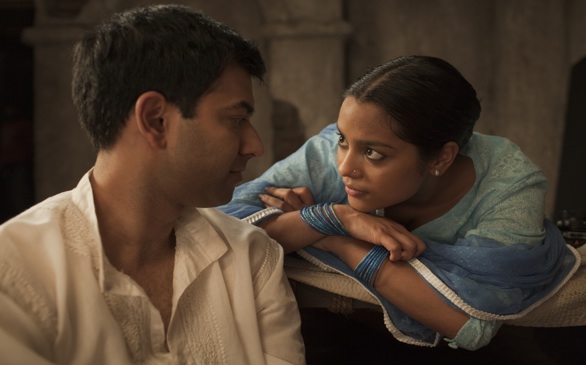 Salman Rushdie. The name alone rings grand. It’s a name suitable for a writer of magical realism, befitting for a knighthood ceremony and perhaps a bit self-fulfilling in an eventful, if not spectacular, life. On page, his literary mark includes the book The Satanic Verses, a novel that 26 years ago elicited a death warrant attached with a large bounty.

Eight years prior to this sentence, a more cheerful prize handed fame to the Bombay-born Englishman. Midnight’s Children garnered the Booker Prize (equivalent to the American Pulitzer) and the name Salman Rushdie, who is a former ad agency copywriter, has been a literary mainstay ever since.

In the acclaimed novel, snot-nosed protagonist Saleem Sinai heralds the Indian independence with his birth. Soon, he finds out that he possesses telepathic power that connected him to hundreds others born in that first hour. One boy has freakishly strong knees, and a girl (Parvati-the-witch) can perform real magic.

“One of the things that was hardest of all to get right was exactly how the magic scenes looked, when these children materialize and dematerialize,” said Rushdie.

“It clearly had to look unusual enough that you could see that something surreal was taking place. But at the same time, we wanted it to feel real, like a group of real children arguing in a room. Just the technical aspect of that, we had to go back to the laboratory many times until we were happy about the way it looked.”

Rushdie not only wrote the screenplay, but he also narrated the film so beautifully that no voice actor could have captured the same spirit. His language straddles the line between warm, like his demeanor, and grandeur, like his name.

He explained, “I’m not a great fan of there being a lot of voiceover in movies. I really prefer it when the film just tells its story. But we came to feel that given the film has three generations and so many characters and [the plot] all over the place, it needed some organizing voice just to hold it together. We never used it in an expository way, [but] in an almost poetic way. It was a late decision, after the first cut, to have a voiceover at all. An even later decision for me to do it.”

Director Deepa Mehta’s arm-twisting skills weren’t purposeless in the two and a half years it took to film Midnight’s Children. Apart from having Rushdie narrate the film, they both insisted on an ensemble despite of some big names in the credits.

“Many of these people have had experience of being a big movie star and being treated as movie stars. But everybody was being paid exactly the same; everybody gets the same hotel room,” said Rushdie.

He added, “There are some very good actors at the very top of the Indian film industry, superstars, and we did talk to some of them. Some of them were interested. But they had no familiarity in working in this way. They make films [that] are entirely made around them. Even with the best ones in the world it’s difficult for them to do, to work in that way.”

Rushdie wrote Midnight’s Children at 32 years old, and now he is almost 66. He remarked, “[I wrote it] in the beginning of my life as a writer, and I’m not quite the same writer as I was then. What you do when you’re younger, you do differently when you’re older. I think it many ways it’s a young man’s book. It had the energy and drive of a young man’s book. The only reason I could do it is because I had so much distance from it.”

How about his latest autobiographical book Joseph Anton that chronicles his life including the aftermath of The Satanic Verses?

Rushdie answered, “That seems to be happening.”