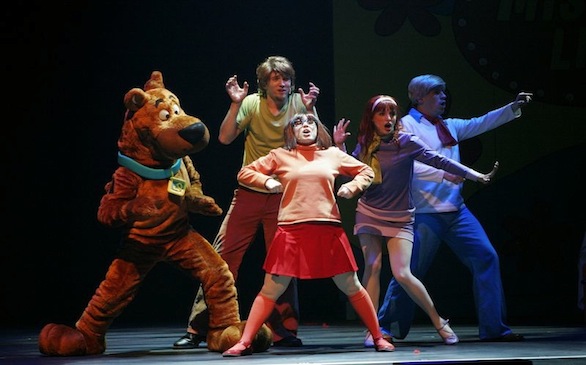 In the beginning, actress Michele Dumoulin didn’t know much about entertaining an audience, more or less even acting. She first got involved with theater around the age of 9, and it came in a rather interesting way.

“I first did it because my brother did a show,” she said. “It was completely random because we weren’t really involved in theater that much. He decided to audition and got a lead role in ‘The King and I.’ My whole family came from out of town to see the show.”

While laughing she added, “I was really unhappy that he was getting all this attention and I wasn’t. So I auditioned the next year and I got into the show.”

That was over 10 years ago. Now, the 23-year-old acting gem plays an integral role in the upcoming “Scooby-Doo! Live Musical Mysteries,” which has two performances at Dolby Theatre on Sunday, May 12 at 12 and 3 p.m., respectively.

Dumoulin is the incomparable, smart nerd in Velma. Originally from Marine, Illinois, Dumoulin’s now a resident of New York. She’s a graduate of the American Musical and Dramatic Academy in New York (AMDA).

She acknowledges that this live musical is reminiscent of the cartoon that’s aired on TV since 1969.

“It’s really similar. All the characters in the gang are all the same,” said Dumoulin, who is very much looking forward to the warm weather in SoCal. “There’s a villain that no one knows who it really is. It follows the same pattern of any episode that you would normally see. It’s a musical, but the storyline is pretty much the same.”

To prepare for the role of Velma, Dumoulin went back to the basics.

The charismatic Dumoulin, who is excited to perform in Hollywood for the very first time ever, noted that chemistry has been essential in the outcome of entertaining audiences around the U.S. while they tour. She feels that the cast acts as if they were the actual “gang” of the show. “That’s been great,” she said.

“It’s that familiar fun of ‘Scooby-Doo’ episodes and people get to help solve the mystery,” said Dumoulin, who is looking forward to the. “You get to be a part of the experience on top of seeing Scooby-Doo and the gang in person. It’s an opportunity for everyone to have fun and hear some great music.”

Interview
'Spamalot' hits Bowl with star-filled cast and a joke rewritten for a changed society
2,183 views

Interview
A Convo with 'The Nutcracker' Prince: Mikhael Kinley-Safronoff plays one of the leads in Marat Daukayev School of Ballet's annual show.
4,769 views