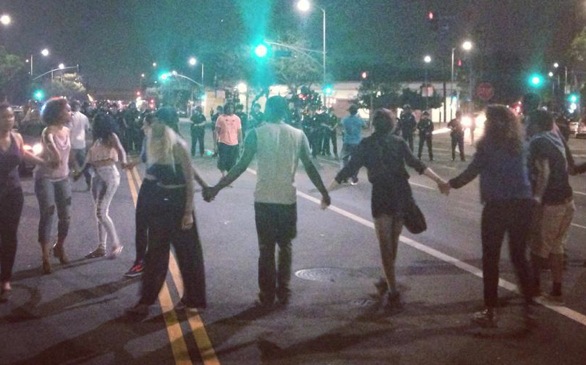 Last night, approximately 1,000 USC students, alumni, parents and others from the L.A. community gathered in the USC Ronald Tutor Campus Center to participate in a open forum with LAPD, DPS and USC representatives. They discussed racial profiling allegations that have been made following LAPD's reaction to a USC college party on Friday, May 3.

Six students were arrested at the party, and party-goers and witnesses claim that LAPD used excessive force and racial profiling when they tried to shut down the party, which was mostly made up of African-Americans. Close to 80 officers in riot gear (and a helicopter) showed up. Meanwhile, across the way, students say a similar party that was the same size and as loud as the African-American one, was not targeted by the LAPD. This party was mostly made up of white students.

At the open forum, attendees asked hard-hitting questions, shared their experiences and talked about what they witnessed last Friday night. The student who was hosting the mostly white party said she saw students being "herded" at the African-American party and that "the only difference between those two parties was that racial component..."

LAPD promises to investigate the racial profiling allegations, and USC is offering psychological counseling for those who were arrested.