Jack Reacher, Not Fade Away and The Notebook: Ultimate Collector's Edition 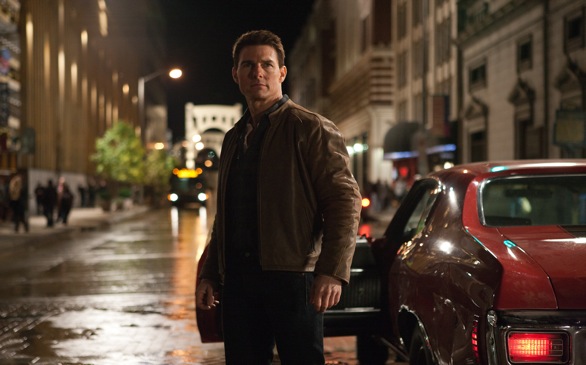 Tom Cruise is Jack Reacher, an ex-military man trying to find out the truth about an accused killer.
(Credit: Karen Ballard)

Allen Hughes (The Book of Eli) directs a stellar cast, including Mark Wahlberg, Russell Crowe and Catherine Zeta-Jones, in the corruption thriller Broken City. Crowe plays a power-mad New York mayor who hires an ex-cop (Wahlberg) to find out who his wife (Zeta-Jones) is sleeping with. But when Wahlberg uncovers more than he bargained for, he makes an enemy of the city’s most dangerous man.

Under the Radar: "The Sopranos" creator David Chase makes his feature writing-directing debut with Not Fade Away, a rock ‘n’ roll coming-of-age story based on Chase’s youth in suburban New Jersey. Set in the 1960s, the film follows a teenager who battles his old-fashioned father (James Gandolfini) and sets out to start a band.

The Horror! The Horror! A young couple (Jessica Chastain and Nikolaj Coster-Waldau, “Game of Thrones”) adopts two orphan girls who, after their parents were killed, had to survive on their own in the woods for five years. But, once in their new home, the girls’ behavior becomes increasingly disturbing. A throwback to slow-burn classic horror, Mama is refreshingly more about building tension and creepy images than gore.

For Mom: Two career-spanning Barbra Streisand releases hit stores just in time for Mother’s Day. In her latest, The Guilt Trip, she is the overbearing mother of Seth Rogen as the two take a road trip from hell. Rogen plays an inventor who is setting out across the country to strike it rich when his lonely single mother guilts him into inviting her along. Dan Fogelman (Crazy Stupid Love) provides the Albert Brooks-esque script for director Anne Fletcher (The Proposal).

Updating the beloved stage play and film Steel Magnolias with an all-black cast, Lifetime’s new version follows six Louisiana women who gather at a beauty salon to share in all of life’s joys and sorrows together. Queen Latifah, Phylicia Rashad and Jill Scott lead a fine cast.

The Idiotbox: Full of chariot races and gladiator battles, “Ben Hur” is the epic miniseries remake of the Charlton Heston classic. Set against the backdrop of the Roman Empire, the miniseries follows Judah Ben-Hur (Joseph Morgan, Immortals), the son of a wealthy Jewish merchant. Betrayed by his friend and enslaved, Ben-Hur sets out on an epic struggle to regain his freedom and take his revenge.

Travel back to 1994 to the beginning of a modern TV classic with “Friends:” Seasons 1 & 2 on Blu-ray. Each episode comes lovingly re-mastered and is accompanied by the previous DVD release bonus features, including the uncut version of “Smelly Cat.”

Stranger Than Fiction: Executive produced by Michael Mann, the four-part HBO documentary series Witness: A World in Conflict Through a Lens puts you on the ground with fearless photojournalists as they travel through some of the world’s most dangerous places, including Juarez, Libya, South Sudan and Rio. It’s a devastating look at what happens when drug trafficking, ethnic tensions and political corruption boil over into unchecked violence.

Steve McQueen stars in one of his most iconic roles in the WWII adventure The Great Escape. Based on a true story, this classic from director John Sturges (The Magnificent Seven) takes place in a Nazi P.O.W. camp built to house the allies’ best escape artists. Now, the crack team, including James Garner, Charles Bronson and James Coburn, sets their sights on breaking out.

It’s Robin Williams as you’ve never seen him before in One Hour Photo. Mark Romanek’s (Never Let Me Go) dark drama follows a lonely photo lab technician who becomes obsessed with the idyllic suburban family he develops pictures for. But as his mental state begins to unravel, his fantasies turn to action.