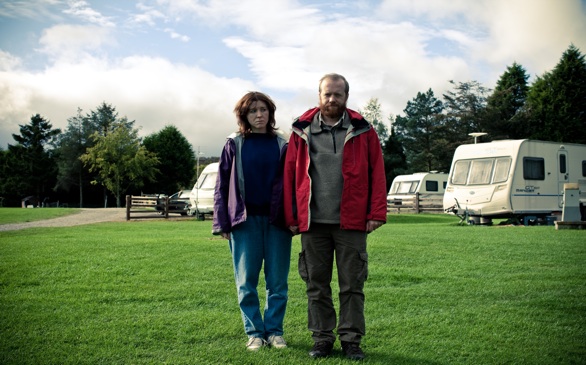 Tina and Chris, an oddball pair, go on a killing spree in this dark comedy.
(Credit: Ben Wheatley)

Picture this scenario that happens too often in the life of a Los Angeles resident: a vehicle, perhaps an SUV, cuts you off on the freeway. You employ the Quentin Tarantino in your head, and the driver comes out spitting blood. Do you feel better?

If the answer is “no,” then your Yoda-like calmness deserves much accolades. If the answer is “yes,” then you may just have the sinister soul to appreciate a dark comedy like Sightseers. Except here, catharsis is no longer achieved through fantasy, and our stars, a couple played by Alice Lowe and Steve Oram, resort to a real-life murder spree.

There’s plenty of gore to go around, but the dry humor isn’t lost in English director Ben Wheatley’s film. In Sightseers, Tina (Lowe) and Chris (Oram), a pair of oddball characters, kick off an innocent excursion through the British Isles in a beat-up caravan. Their itinerary is typical enough for a rural countryside adventure: a tramway village, a museum of pencils, a dilapidated monastery and a lot of fog.

Lowe and Oram are live comedy performers, and they spent several years as Tina and Chris on stage. “We had the characters before the idea, I think,” Oram recalled, according to a prepared statement. “These suburban caravan lovers from Redditch. We just found it funny them talking about mundane things and then disposing of body parts in the same breath. The idea to have them going on holiday and knocking people off whilst visiting tram museums was something that made us laugh.”

From a stage act came a television pilot, which was quickly rejected by networks for being too dark. In the hands of up-and-coming Wheatley (Kill List), the idea came to life.

“What about being ginger?” Tina asks Chris in a quiet conversation about their childhoods just before their holiday starts. No, Chris' red hair didn’t help his childhood experiences at all. And so perhaps this justifies why he is the way he is. Perhaps this sets the tone for Sightseers, where every violent act seems to be justified with reasons like: a candy wrapper was crudely littered on a historical tram or a group of bachelorette partiers were being obnoxious.

The murders aren’t premeditated, and if they were thought about at all before the act, it’s only a few minutes of rash annoyance. Weapons come in the form of blunt rocks, a forceful push off a bridge, and at the end of the road, a false notion of romance.

Dark comedies are rarely crowd pleasers, and Sightseers is no exception. Its humor isn’t the obvious kind that pleases your regular comedy fans, nor suspenseful enough for crime genre enthusiasts.

What it thrives on are wit and surprise -- who will be next? Will it be the loud teenagers celebrating a faux-Burning Man festival in the next campsite? Or will it be the guy adamantly asking for the dog’s feces to be picked up?

Those hankering for more dark comedies in film, or even just frustrated sinister souls, will be pleased.

Sightseers releases in L.A. theaters on Friday, May 10.