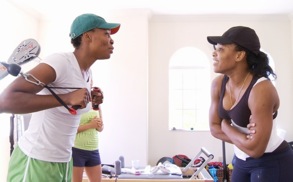 The documentary takes a look into the sisters' ups and downs as the world’s greatest tennis players.
(Credit: Courtesy of Magnolia Films)

It’s 1990 in Compton, Calif. Richard Williams and his daughters are running drills on a dilapidated tennis court in the middle of the ghetto. As each girl takes a turn hitting a ball, he analyzes the techniques and tells them what changes to make. The balls the girls have to practice with are used rejects that their father begged for from the Rivera Country Club. When the girls are done, they gather the balls, put them back in a rusted shopping cart and start a new drill. It was here, in one of the most crime-ridden areas of Los Angeles, where Venus and Serena Williams began their incredible careers.

In a new documentary appropriately titled Venus and Serena, director Maiken Baird shares anecdotes such as this in order to tell the complete story of these two athletes, sisters, champions and fashionistas. The film highlights their current struggles with health, age and identity, as well as the many hurdles these amazing women had to overcome in the past.

To create the documentary, Baird had camera crews follow both Venus and Serena for the entire duration of the 2011 calendar year, starting in January when Serena was hospitalized for a blood clot and Venus was also struggling with health issues. Their story moves forward from there and discusses tennis, femininity, fame, family and race. As the story of their lives in 2011 progresses, flashbacks to significant moments from their past are used to further develop the complete narrative of their life-long journey towards greatness.

The film manages to address all of Venus and Serena’s major life moments, which is a difficult feat to accomplish given that they were the first sisters and first African Americans to claim the top two spots in the world rankings. From shouting at line judges to winning Wimbledon trophies, every important event in their tennis careers is discussed.

However, the film also explores the more personal moments of their lives such as the death of their older sister, their opinions on marriage and their religious beliefs. Personal interviews given by the two sisters, their family members, trainers and close friends reveal a deeper look into their lives and how far they have come. Some of the interviewees include recognizable faces like comedian Chris Rock, former President Bill Clinton, tennis champ John McEnroe and Vogue editor-in-chief Anna Wintour.

Some of the most compelling parts of the film are the girls’ personal interviews when they were between the ages of 11 and 14. Even back then, before all of the awards, championships and trophies, both girls had complete confidence that they would eventually be ranked number one in the world. It’s bizarre that these girls could predict their achievements with such certainty, as if becoming a world champion was a fact rather than a dream.

In the film, Venus says, “My parents told me I’d be number one in the world. I was brainwashed,” and then she laughs. This leaves audiences wondering: Was it their confidence that led these women to achieve greatness, or was it their greatness and their athletic talent that caused their confidence?

When discussing the very first competition between Venus and Serena at the U.S. Open, John McEnroe said, “Two U.S. players, sisters, same household, same bedroom, primetime, Saturday night, U.S. Open. No one could have scripted that ever.” While it is true that no one scripted their lives, Venus and Serena does a good job of putting their story in the cinematic form. The life of a champion is one that is naturally filled with suspense, obstacles and struggle – and this film is the story of two champions.

Overall, Venus and Serena reveals the amazing confidence and perseverance these athletes possess, as well as the quirky and loving relationship they have with each other.

Venus and Serena releases in theaters on Friday, May 10 at the Laemmle Royal Theatre in L.A. For more information, click here.