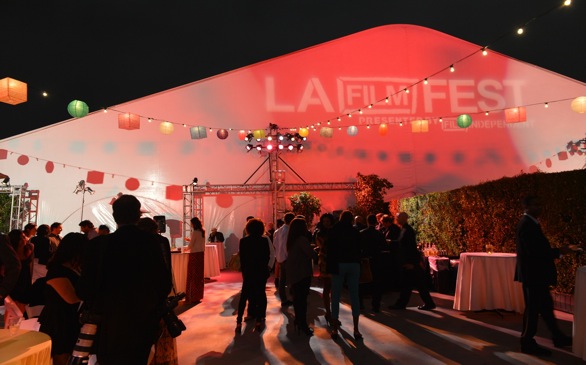 This year marks the 19th annual Los Angeles Film Festival, which brings outdoor screenings, Coffee Talks and other popular cinematic events to film fans living near the L.A. area. The event is hosted by a non-profit organization called Film Independent, which supports independent films and filmmakers. The festival gets more than 5,200 submissions and premieres about 30 films in different venues around L.A. Throughout the years, the festival has featured some big names as the guest directors like Kathryn Bigelow (The Hurt Locker/Zero Dark Thirty) Ang Lee (Life of Pi) and even George Lucas. They also have a long list of notable speakers that participated in the past, which includes A-listers Ben Affleck, Quincy Jones, Sylvester Stallone and many more. This year, the festival’s home base will be at L.A. Live and most of the screenings will be at the Regal Cinema’s L.A. Live Stadium 14.

The Evolution International Film Festival is held in different countries around the world, allowing films to gain a global audience. This “nomadic” festival screens “socially relevant, provocative, and innovative films” such as Sam French’s Buzkashi Boys shot in Afghanistan and Bryan Buckley’s Asad shot in South Africa, which both went on to receive Academy Award nominations after being screened at the EIFF in Palma de Mallorca, Spain in October 2012. The film entries are separated by categories including narrative feature, shorts, documentary, documentary shorts, animated shorts and student shorts. Whether you are at the EIFF in North America, Europe or Dubai, you are experiencing fantastic cinematic works as well as networking events and industry panels. The last time the EIFF was held in America was in March 2012 at the Los Angeles Film School, and it featured films from Egypt, Switzerland, Mexico, Lebanon and more.

OUTFEST, one of the world’s largest events for LGBT cinema, was founded in 1982 by a couple of UCLA students who wanted to promote equality by celebrating LGBT short and feature-length film narratives. The 10-day event will showcase about 150 new short and feature films as well as host panel discussions and parties. Throughout the festival, 40,000 guests converge at the John Anson Ford Amphitheatre, the Orpheum Theatre and other locations in LA to view winning LGBT films.

When people think of movies, the film industry, and Hollywood, they do not think of downtown L.A. Let’s face it, downtown has never been a gem to brag about in L.A, especially when we have the beach, Hollywood, Disneyland and other attractions that capture more attention. However, over the past couple of years, downtown L.A. has grown into a buzzing scene for young hipsters and professionals. And in 2008, it became significant and attractive enough to even get its very own film festival. Since then, the Downtown Film Festival Los Angeles has screened more than 1,000 feature-length and short films and they will bring more creativity, art and entertainment this summer. In the past, this festival hosted the West Coast premiere of Spike Lee’s Passing Strange: The Movie, a showcase of independent films using 3-D technology, and the L.A. premiere of Michael Jackson’s “lost” film about his Jackson 5 Tour of Africa.

Establishing shot – A shot that establishes the location and atmosphere of the scene. For instance: a shot of a graveyard on a foggy day.

Jump Cut – An unnatural and instantaneous cut from one action to another.

Reaction Shot – A shot of an actor’s reaction to something else. This is often used to build suspense, especially in horror films.

Montage – A series of shots edited together to show a longer activity evolving in a shorter amount of time. For example, the montage between the old man and his wife in Pixar’s Up.

Avante-garde – A type of film characterized by unconventional, obscure, and personal ideas. Use it to describe films or ideas that are experimental and innovative.

*REMEMBER: When in doubt, mention how much you love Pulp Fiction. That should gain you some respect.

What to Wear:
The problem with film festival attire is that you need a hipster chic outfit that is also comfortable. Be careful to not out-hipster yourself: only one bold accessory is necessary. Do not wear a fedora, black-rimmed glasses, a denim button up shirt, a scarf and mustard-colored jeans all at the same time. Do you want to run into Ryan Gosling looking like an Urban Outfitters sale rack? I don’t think so.