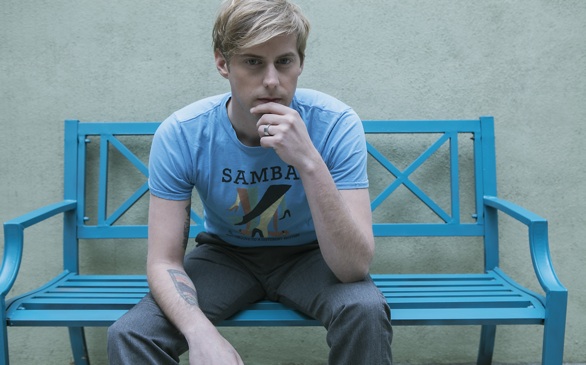 Andrew McMahon is the former frontman of Something Corporate and Jack's Mannequin.
(Credit: Frank Maddocks )

When Jack’s Mannequin announced their expected retirement last fall, fans were a little distraught. Followers of Andrew McMahon’s career began to mourn the loss of the Something Corporate’s wildly successful side project, listening to Everything in Transit on repeat, driving through the streets of Venice whilst glaring menacingly at tourists in angst.

This may be my own personal narrative, and it may not be reflective of everyone’s situation, but I think it’s safe to say that people were taking it pretty hard. And who’s to blame them? Although we knew that Everything in Transit was always meant to be an only child, we couldn’t help but restore hope when The Glass Passenger appeared on iTunes, and by the time we got our hands on People and Things we were downright spoiled, if not in complete denial regarding the original intended shelf life of our favorite alt-rock band.

In February 2012, McMahon began dropping hints that it would be time for a Jack’s Mannequin retirement soon. Over the summer, he announced the date for his final concert, a Dear Jack Benefit Show in November. Tickets to the show sold out almost instantly (partly due to overexcited fans and partly due to opportunistic scalpers on StubHub), forcing McMahon to add a second farewell night at the El Rey for the following night. For attendees, the night was one of closure and a celebration for that which was to come for the seasoned artist.

Even during the Jack’s break-up, McMahon remained vocal about his intentions to continue making music and creating art that resonated with fans.

In an interview, McMahon told Campus Circle, “Jack’s, to me, was a conceptual thing. When we got to the People and Things record, it really felt like things had tied themselves up. Originally, it was only going to be a one record project, and then it turned into two - I think it took that third record to complete the circle and move things in a new direction.”

McMahon’s departure from the “Jack’s Mannequin” moniker has hardly affected his creative process, a fact made evident in the recent release of his debut solo EP, The Pop Underground. The tracks on the record seem to echo McMahon’s current attitude towards his journey thus far; both “Synesthesia” and “Learn to Dance” articulate the act of overcoming hardship in order to live freely and presently. Although the new EP’s overall sound gives us more of the distinct pop-punk-rock collaboration that is distinctively Andrew McMahon, there are some newer, minimalist electro elements that he plays with as well.

When asked about the process of entitling the new EP, McMahon spoke about the spirit of pop as a cultural following of individuals, one that goes beyond the mainstreamed reputation of the genre:

“The “pop underground” is something that I’ve been kicking around…it’s a reference that I’ve used and applied it both to the fan base I’ve developed over the years - this amazing group of people that have seen me through, not one, but two bands and continue to follow me as I’ve grown – and I also refer to the music that I’ve created in a similar way because I look at what I do as pop music. I think there’s an irony in the idea of the ‘pop underground,’ the thought of making popular music that never really gets all the way to the mainstream.”

McMahon has been very vocal about his contentment with the “indie pop” genre label. In fact, the lyrics of his new track “Synesthesia” read: “Yes I’ve never made a gold record/And I’ve never been to Mars/But I’ve traveled around this world.” This artist has never been the kind of person to engage in the Top 40 rat race, but having been on the music scene for quite some time, it is clear that he knows exactly what he wants for himself and for his music.

More than 10 years removed from his punk rock days as the frontman for Something Corporate, McMahon looks back on his teenage music-making years with fondness, citing his relentless quest for perfection in his work. As Something Corporate’s inception came when McMahon was only 16, he recognizes that he was forced to grow up a little faster than most high school kids his age.

“Looking back on it, I wish I would have told myself to lighten up, to not take everything so seriously,” he said.

This is McMahon’s mantra of today: slow down, take things as they come and make yourself present to the good things in life. Accept the cyclical nature of everything that you do and you will always find yourself prepared and excited for new opportunities.

As an artist who has undergone vast transformations in both his creative work and his personal life, McMahon has epitomized what it means to be a phoenix in the music industry; to never cease creating, even if it means starting over from scratch.

You can catch Andrew McMahon at the Troubadour on Wednesday, May 15, 2013.