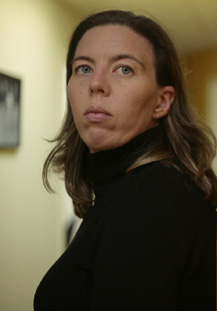 Untitled Document Stacy Vasquez is a former Army recruiter who was booted out for being a lesbian in 2003 after 12 years in uniform. Tommy Cook’s tour in Army intelligence ended the same year at Fort Hood, Texas, after he acknowledged he was gay. Both were in jobs the Army regards as crucial these days.

If Vasquez and Cook had been in the British army, they would have fared differently. Since 1999, the United Kingdom has allowed gays and lesbians to serve openly. Starting next month, some gay couples will even be eligible for married housing on British bases.

The U.S. military, by contrast, drums out hundreds of gays and lesbians each year under the 1993 law known as "Don’t Ask, Don’t Tell" – even as an Army stressed by major deployments in Iraq and Afghanistan falls thousands short of its recruiting goals.

And while gay-rights advocates cite Britain’s experience as evidence they could serve openly without disrupting the military’s social fabric, neither Congress nor the Pentagon show any interest in repealing the statute.

Congress based Don’t Ask, Don’t Tell on a finding that allowing gays to serve openly could disrupt the military’s unit cohesion by creating tensions among soldiers and eroding morale.

More than 10,000 service members have been discharged in the dozen years since the law took effect, replacing a previous outright ban on gays in the military.

Don’t Ask, Don’t Tell allows gays and lesbians to serve, but only if they refrain from "homosexual conduct" – defined as "a homosexual act, an admission or statement of homosexuality, or marriage or attempted marriage between persons of the same gender."

The Government Accountability Office, the investigative arm of Congress, found in February that 757 of the nearly 9,500 service members expelled during the first 10 years of the law held "critical occupations." They included 54 Arabic speakers, for example.

Vasquez and Cook hold themselves out as examples. They are among 12 ousted service members represented in a federal lawsuit filed in Massachusetts by the Servicemembers Legal Defense Network, which aims to overturn the law as unconstitutional and reinstate them in the military.

Vasquez, 32, joined the Army in 1991 after graduating from high school. When she joined the Army Vasquez said, "They did ask me if I was a homosexual in my contract, and I honestly answered ‘no.’ During my first enlistment I was even married to a man."

Only after 1997, the year her marriage ended, did she begin to "identify as a lesbian," she said.

By 2003, she had risen to the rank of first sergeant and was one of her station’s top recruiters. But "I was called into my commander’s office one day and I was told that a coworker’s wife had seen me kiss a girl in a gay bar," Vasquez said.

The commander, she said, offered her a choice: she could either face a criminal charge of indecent conduct or write a statement declaring herself a lesbian and receive an honorable discharge. Citing the lawsuit, Vasquez declined to say whether she kissed another woman that night at a lesbian club in Dallas. But "I did write the statement," she said, to avoid a criminal charge. If not for his discharge, Cook might have served in Iraq. His unit was there from January 2004 to February 2005. Cook, 23, joined the Army in April 2001. By October 2003, the specialist was in line for promotion to sergeant when he went to the Army’s National Training Center to prepare for Iraq.

For three weeks, he worked in a Humvee and lived in the field with two sergeants at the Mojave Desert base, Cook said. One day, after an "obviously gay" soldier walked by, Cook said, one of the sergeants remarked that "if he ever found out anybody on his team was gay, he would kill them."

But on the service members fund’s advice, Cook said, he wrote a letter to his company commander describing what had happened and asking for a transfer.

Accused of looking for a way to avoid going to Iraq, Cook was told he would get a discharge that would leave him ineligible for many veterans benefits. He appealed and won an honorable discharge.

Rep. Martin Meehan, D-Mass., has introduced a bill to repeal Don’t Ask, Don’t Tell, and has 100 co-sponsors, but there is no sign Congress will pass it.