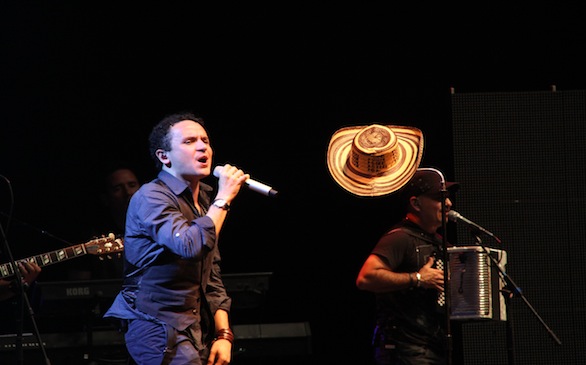 Fonseca’s incomparable ability to entertain an audience continues to fruitfully grow musically. Just that and much more was perceived Thursday night as his “Ilusión World Tour” made a stop in Los Angeles at Club Nokia.

The Colombian singer-songwriter performed tracks from his latest album (Ilusión), but Fonseca also managed to captivate his fan base with tunes from early in his career. His live singing and instrument playing have never been better, and the opening song of the show proved that.

“Eres Mi Sueño,” an energetic electro-merengue and pop melody, served as a perfect starter. The upbeat piece put everyone to dance and lively portray its lyrics from beginning to end. Fonseca considers it to be a “Caribbean merengue,” and that’s exactly how I felt – especially when it’s being delivered live.

Fonseca’s mesmerizing show was masterfully planned and well-orchestrated; it carried different genres of music in various premeditated segments. Three others of its kind followed the opening song, more or less; it ended with “Enrédame” from the album Gratitud (2008).

One of the grandest gestures arrived when Fonseca paid tribute to his country’s popular folk music, vallenato. This particular genre of the Colombian valleys represents a lot to Fonseca. Over the years, he’s managed to incorporate vallenato-type lyrics and rhythms into his repertoire. Although it’s a neoteric approach, Fonseca reaches a distinctive plateau of pleasuring people musically.

With the infectious likes of “Perdón,” “Mercedes,” “Historia de Amor,” “El Cantor de Fonseca” and an enriching accordion beside him, Fonseca serenated his crowd. He even went as far as collecting a beloved Colombian flag and sombrero vueltiao (infamous hat with lips produced only in the vibrant South American nation) to bring on stage. That was a wonderful moment for him and his country-mates.

Fonseca, a three-time Latin GRAMMY winner, resembles to be an ideal example that tropical and pop music can be fused successfully. The Dominican merengue-bachata master Juan Luis Guerra has heavily influenced him, as well as the vallenato entity of Carlos Vives. When combining the two and while adding his authentic aspects of music, Fonseca naturally cultivates the tropipop.

He flourishes in it, and that was witnessed in “Ilusión,” “Desde Que No Estás,” and “Arroyito” – three instances in which Fonseca captured everyone’s mind, heart and soul. On top of being rhythmic songs, each tune sports romantic words and catchy sounds.

Before closing with “Hace Tiempo” and repeating “Eres Mi Sueño” as the encore, Fonseca performed his most globally recognized song in “Te Mando Flores.” It was an uplifting moment.