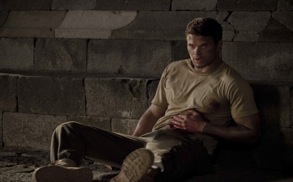 A man is sitting at a table in an interrogation room. He’s sweaty and slightly dirty with a little blood on his face and shirt. However, none of that takes away from his attractive bad-guy persona. His name is Jake (played by Twilight’s Kellan Lutz), and he’s in a whole lot of trouble.

Java Heat (directed by Conor Allyn) is a new action thriller starring Lutz and rising Indonesian star Ario Bayu. The film is set in Indonesia and opens up with Jake in the interrogation room by himself until detective Hashim (Bayu) comes in and starts asking him questions about a terrorist attack that occurred at a royal party: A suicide bomber killed himself and numerous partygoers. According to Jake, he attended the party as a guest and has no connection to the terrorist attack, which also resulted in the disappearance of the country’s beloved Sultana - their “very own Princess Diana.”

The film is filled with twists and turns. Immediately, you start questioning every character’s motives: Is Jake who he says he is (an innocent student)? Is the Sultana alive or dead? Was the bombing indeed a terrorist attack?

As Java Heat progresses, your questions get answered one by one as you witness gory gunfights and fast-paced chase scenes. Jake and Hashim team up, become sort of partners and try to solve the case together. Their relationship is strained at first, yet very entertaining to watch, but a trust between the two eventually forms.

In the beginning, you’re unsure about Lutz’s character. However, once you find out why Jake is in Indonesia and why he was at that royal party, you can’t help but like him. Lutz does a phenomenal job. He gives you a little vulnerability without losing that delightful badass-ness we love so much. His fans will definitely appreciate his performance, and he might even gain new ones.

We all knew that the burly Emmett Cullen from Twilight was going to bring the muscles (by the way, there’s a shirtless scene where female viewers might find themselves momentarily drooling) and athleticism to the film. With his kicking, punching, gun firing and ability to jump off rooftops, Lutz proves in Java Heat that Taylor Lautner (Abduction) isn’t the only who can break away from the Twilight mold and score killer roles in action films.

There are numerous films about terrorist attacks. However, there are very few films like Java Heat, which starts off as your “typical terrorist thriller” and transforms into something much more. Those looking for an action movie with a little more punch and more surprises will love this film.

Java Heat releases in Los Angeles theaters on Friday, May 17, 2013. For more information on the film, click here.