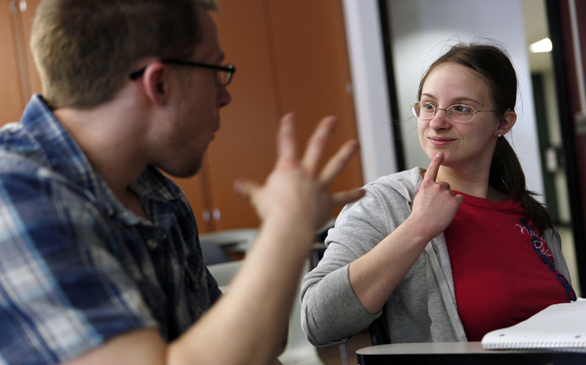 Every year, more college students in the U.S. are learning a new language without uttering a word.

American Sign Language has become one of the most popular language classes, ranking fourth in the latest Modern Language Association Survey - and nearly shoving German from third place. The number of students taking the language has risen by more than 50 percent in the past decade.

The University of California-Berkeley added the course in the fall, joining scores of colleges that have done so in recent years.

"It's just really nice to be able to talk to people in their own language," said Hamza Jaka, a Berkeley student and disability rights advocate who said he urged the university to offer the class. "I had a lot of deaf friends, and I always felt bad because I had no idea how to sign."

In 1990, few U.S. colleges taught it. Now, the study of American Sign Language is attracting students in fields such as health care, education and linguistics, in addition to those motivated by personal reasons or curiosity.

Interest has been building over the more than two decades since the American Disabilities Act passed, requiring hospitals and agencies to communicate effectively with the deaf and hard of hearing and banning workplace discrimination against people with disabilities.

In fall 2009, more than 91,000 students took the class at 730 U.S. institutions, according to the language association, which expects to release its next survey in early 2014.

"These programs have grown up," said Rosemary Feal, executive director of the Modern Language Association. "For many students, it may be the first time their institutions are giving them this opportunity."

In Berkeley's sign language class - taught by Patrick Boudreault, who was born deaf - no one speaks aloud.

"For a long time I didn't know what anyone's voice sounded like," said Jo Gookin, a linguistics major.

The classroom is not quiet, though. On a recent Tuesday morning, outbursts of laughter interrupted stretches of intense concentration.

"It's a really creative language and it's really visual, and sometimes the way you sign things makes you laugh," said another student, Gillian Sherif.

But American Sign Language - ASL, as it's commonly called - has its own grammar and meanings; it's not simply English expressed through gestures. It and other sign languages are rich with symbolism, history and culture. And, yes, people in different parts of the world have their own signed languages. Boudreault said some deaf community activists are still fighting for wider acceptance of the language. One of the reasons researchers don't have a reliable estimate of how many people sign is that the U.S. Census Bureau categorizes it as English, rather than as a separate language.

Yet, the University of California and some other colleges allow the course to satisfy foreign language requirements. Others, such as San Jose State and San Francisco State, teach it in their schools of education. Berkeley City College, just down the street from the University of California-Berkeley, has an entire department devoted to teaching American Sign Language.

Boudreault's students find themselves signing to one another outside the classroom and, in it, veering into conversations about weekends and boyfriends.

The professor doesn't mind. What better sign of language proficiency than the ability to gossip?