Graduates Hope for Pomp and … Jobs 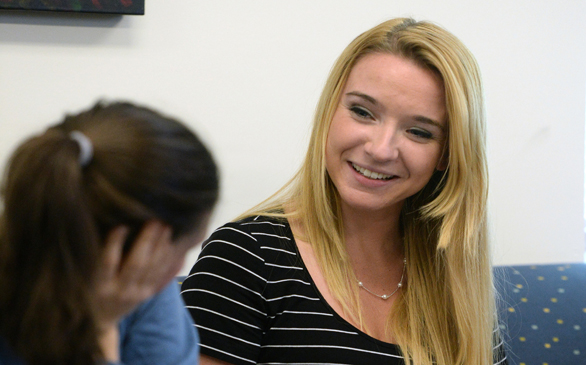 As strains of "Pomp and Circumstance" drift from college campuses this month, odds are improving that new graduates' next stop will not be their parents' basements.

Hiring isn't strong, but it sure looks better than it has since the economy tipped into recession a little more than five years ago.

"For sure, I thought I would graduate with a job - definitely," said Morgan Woodbury, 22, a senior at Kennesaw State University. "I think the job market is good right now."

Her experience is evidence: Woodbury felt confident enough to turn down an initial offer from shipping service DHL. The company offered a different job with better pay and - with her graduation still a few days away - Woodbury is working in international sales in a territory arcing from Atlanta to Chattanooga.

"The pay starts with a pretty good base, plus an allowance, plus commission," she said.

Job growth isn't absorbing all of these new graduates, said Phil Gardner, director of the Collegiate Employment Research Institute at Michigan State University. "There has been steady improvement but it's not enough to clear the new grad market. We need some double-digit (job) growth."

Still, the hiring outlook is improved. In 2009, when most of this year's grads started college, the unemployment rate was cresting at 10 percent nationally. Since then, the national rate has ticked down to 7.5 percent in April.

And the job market is better on average for college graduates. Among people with at least a bachelor's degree, the jobless rate is 3.9 percent.

Business hires are averaging 7 percent more than a year ago.

"There is definitely hiring going on," he said. "For the first time in quite awhile, I actually feel confident that I can get a job."

Technology and finance are the hottest sectors.

"We hire a ton of people each year," said Bob Eichenberg, greater Atlanta market human resources leader at PwC, a global auditing, accounting and consulting company with about 1,250 employees here.

Experts in finance have been in steady demand, he said. "People still have to have audits. They still have to file their tax returns."

Grads with liberal arts degrees have to show that their skills "are transferable" to business needs, said Emory University senior Alexi Lauren New, 21, who majored in sociology and anthropology. With so many unemployed Americans, companies can be very selective, so that argument is not an easy one, she said. "I think it's a tough market out there."

The Rockville, Md., native has a yearlong fellowship in Washington.

By last year's commencement, only 16 percent of Emory's graduating seniors were unsure what they would do in the coming year, said Paul Fowler, executive director of the university career center. About half of them ended up going on to more school.

The situation is about the same this year, but "we have seen a number of companies calling us out of the blue this year," Fowler said. "That's an indication that things are getting better."

There is risk for graduates who do not find a position fairly quickly.

Going without a job - or taking a poor-paying position you're overqualified for - may handicap a young employee's economic potential, said Carl Van Horn, director of the Heldrich Center for Workforce Development at Rutgers University and author of "Working Scared (Or Not at All)."

"The basic point is that where you start with your salary and benefit has a tendency to influence the first decade of your career," he said. "The reason is that employers look at salary history and they tend to pay accordingly."