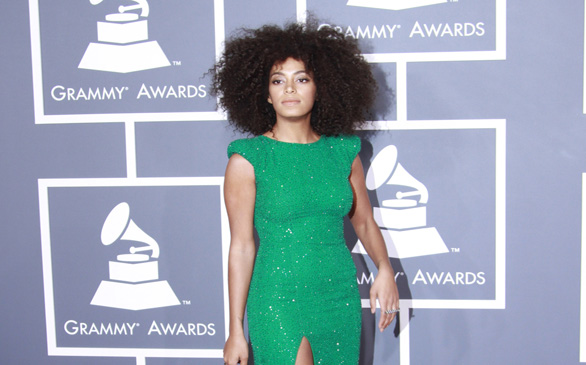 After switching from a major label to go independent, Solange Knowles is returning to a traditional label -sorta.

The singer-songwriter-model has announced that she is starting her own imprint called Saint Records. It will be distributed through Sony.

Knowles took to Twitter to make the announcement early Tuesday after reports surfaced that she had signed a deal with Columbia (which is owned by Sony). Saint Records is where "I'll be releasing my full length album, and also future music projects that I'm excited about sharing," she tweeted.

Fans, and critics, have awaited a proper full-length from Knowles since she broke out with her 2012 EP, "True." Her slow sonic evolution has been a captivating one to watch since she released her 2003 debut of inoffensive pop-R&B.

Before coming into her own on 2008's criminally overlooked "Sol-Angel and the Hadley Street Dreams," Solange struggled to find her footing and overcome the expectations that come with being the little sister of one of the biggest stars on the planet (Google, if you're unaware).

On "True," she paired with British producer-musician Dev Hynes (best known under the monikers Lightspeed Champion and Blood Orange) for the project that brimmed with shimmering dance grooves plucked from a dusty '80s jukebox.

Critics loved it - Times pop music critic Randall Roberts praised its "takes on funky dance music that's smooth without being cheesy, and well-lubricated with solid, snare-driven rhythms" - and armed with the indie cred she had amassed over recent years, the project finally got her taken serious, and not always mentioned in the same sentence as her older sibling.

Knowles issued "True" via Terrible Records, which is co-run by Grizzly Bear's Chris Taylor; before that, she was signed to Universal's Geffen imprint.