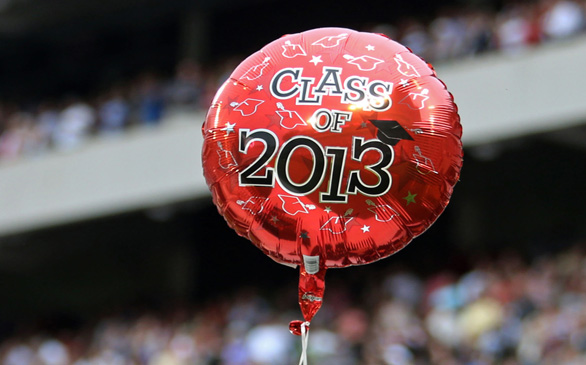 Five years ago, Nick Moeder and his friends counted themselves lucky. In the dark heart of the Great Recession, they were starting college rather than trying to start a career.

"All the reports were that there were no jobs for anyone," said Moeder, a fifth-year senior who will graduate from Kansas State University this month. "We were thinking maybe things will be better by the time we graduate."

But the national conversation during his college years has been a grim one, all about soaring tuition bills, astronomical college loan debt and a persistent dearth of jobs.

Think of Moeder and his peers as Gen R - the Recession Generation. They first set foot on campus at the height of the worst economic downturn in more than 70 years. Now they're graduating after years of watching the economy stagger and slide before starting a slow rebound.

The experience, for many, not only shaped their choices during college but also recalibrated their attitudes and outlook.

Tess Hart graduated Saturday from Rockhurst University, where she majored in economics, political science and criminal justice. Next stop: Micronesia, where she'll spend time in the Jesuit Volunteer Corps. Then she'll look for a job. She thinks maybe prospects will be better then.

"I think that students have a heightened apprehension about what lies ahead after college since the recession, and some have even chosen a career according to what they believe the market will demand," said Hart, 22, of Independence, Mo.

The consequences of graduating in a downturn are long-lasting, said Emily Rauscher, a University of Kansas sociology professor. They include lower earnings, a slower climb up the occupational ladder and a widening gap between the least- and most-successful grads.

At 16.1 percent, the April unemployment rate for workers younger than 25 was slightly more than twice the overall average. Among recent college graduates, 53 percent are underemployed or don't have a job at all. And those graduates carry about $25,000 in debt on average.

Rauscher said when she talks with students about their future, they are keenly aware that they face a greater possibility of ending up in "failure-to-launch mode," unemployed or underemployed and back in the bedroom they decorated in high school.

"I try to tell them that this is a sociological thing and it is not their own fault," she said. "But there always seems to be so much hope going into graduation. Students are hoping, 'Maybe I won't be the one that this happens to.'"

Still, some are left questioning whether sinking so much money into a college education was a worthwhile investment.

William Black, an economics professor at the University of Missouri-Kansas City, said that recession or not, a college education is still associated with a constellation of benefits in life: "Less likely to end up on the negative side of the criminal justice system. Less likely to have bad health, have children before marriage, have a marriage end in divorce."

But he also said that students who have waded through the recession are likely to graduate more worried about debt, jobs and whether Social Security will last.

"It's their generation that is going to get screwed," Black said.

Moeder, a 22-year-old finance and accounting major, said fear that the bottom could fall out of the economy again at any time drives some 2013 graduates to "be more conservative about investments, about savings."

"I would speculate that this is the time in our lives when we begin really thinking about these things for the first time," he said. "I think my peers keep in mind that the future is pretty unpredictable. It's scary."

Hart said she is convinced that members of the Recession Generation will be better savers and better money managers than their parents.

The solution for Angela Muhwezi, a 23-year-old biology student graduating from Kansas State University, is planning. Even though she hasn't yet started work, she's already thinking about retirement savings.

She's planning to go to dental school in California but is taking a year off to work as an event coordinator in Los Angeles at $17 an hour. She'll use that money to pay off $20,000 in student loans she's already accumulated before taking on more debt for grad school.

Muhwezi doesn't want to end up like other new graduates she knows, heading back home to live with parents.

"I've learned," she said, "that just because you have a college degree doesn't mean your financial stability is guaranteed."