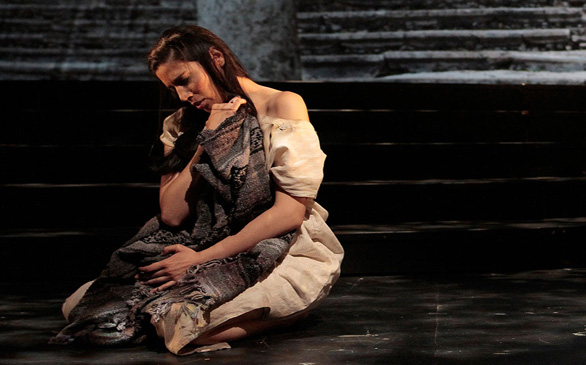 For María Antúnez, it all started when she was young and living in her native nation of Uruguay, unarguably one of South America’s most beautiful areas.

And the same can be said of Antúnez, a soprano who debuts tonight in “Dulce Rosa” at The Broad Stage in Santa Monica at 7:30 p.m.

“I began taking singing lessons when I was 8 years old,” a charming Antúnez confesses. “I come from a family in which there are no musicians, but it always interested me. Instead of playing with the other kids, I would sing and dance.”

Antúnez recalls that at one point, her mother asked if she wanted to take singing lessons. Antúnez said yes, and she fell in love with singing thereafter.

“I've always been inclined to classical music even though I come from a very small town where we saw little or anything regarding music,” she added while noting that her profession is her ultimate passion along with family.

Now the entire city of Los Angeles has a chance to witness her love of singing and being on stage. Antúnez plays the title role in “Dulce Rosa,” which also has shows on May 25 and 28, as well as on June 3, 6 and 9.

The one-and-only Plácido Domingo will conduct the production, which also features celebrated Chilean novelist Isabel Allende as a special guest during this evening’s pre-concert lecture.

The Broad Stage and LA Opera have joined forces in co-producing the world premiere of “Dulce Rosa,” based on Allende’s short story titled “Una Venganza” – a dramatic, yet romantic plot of revenge and redemption set in a South American country in the early 1950s.

Antúnez doesn’t shy away in explaining why Domingo selected her for this particular lead role.

“The very first time I heard about ‘Dulce Rosa’ was in March of last year,” she recalled. “Plácido Domingo heard me sing in Washington D.C. and right after I finished, he said he would like me to do this new opera. He said it was very dramatic and that I was perfect for it. So I said yes.”

“Dulce Rosa” is a completely fresh piece. There are no recordings of any kind, so Antúnez went on to do what anyone else would do: read.

“I read the story and it was breathtaking. It was a shock – very strong content,” she said. “So when Plácido said dramatic, he wasn't kidding. It captivated me. The story is very intense and a lot of things happen.”

Antúnez went on to acknowledge that she’s “very excited and happy” about making her personal debut and being involved with the opera’s premiere, too. She’s twice as thrilled.

“It's an honor to have been chosen by Plácido and him giving me this responsibility of being the first ‘Rosa.’ I feel like I have a lot riding in my hands. At the same time, however, it's something I'm enjoying a lot.”

But why should the public go see this show?

“It's great for people who love drama, like me,” she said. “There are very few things that are as dramatic as this. It's very intense; the music is beautiful and not that hard to understand as some people might think. It has some strong moments, but it's very easy to follow along in that sense. But quite simply, the story is incredible.”

For more information on "Dulce Rosa" at The Broad Stage, click here.