Reyli Continues to Grow As An Artist 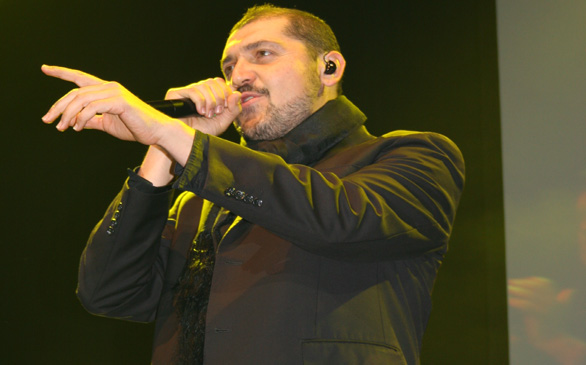 Mexican singer-songwriter Reyli performed at an intimate concert Saturday night at the Honda Center in Anaheim.

The event focused on the Latin community, was sponsored by Northgate Supermarkets, and admission was by invitation only. The artist was very humble and accessible, and performed his greatest hits in a short, yet high-quality set.

In an altruistic effort to contribute to and support Latin roots, Northgate Supermarkets continuously sponsor free concerts and events with renowned artists for the Latin community here in Los Angeles. Such was the time for Chiapas-born Reyli, who gave a great hour-long concert despite. It's fitting to point out that this performance was special, since it was not part of his official tour.

Reyli seems very humble and relaxed at this point in his life, with all the disposition and patience in the world, tended to all the fans who were able to meet him privately and have their pictures taken with their idol, a man known as a citizen of the world.

In a brief conversation with the press, he discussed the joys his last album, Buena Compania, has brought him, as well as what his new album will be like, which comes out soon. But he didn't want to reveal too much. He did assure everyone that it will be full of surprises.

Despite the success he's experiencing as a singer-songwriter, he seemed very stable and relaxed in his personal life, and he confirmed that he is still good friends with Ana Barbara and have a strong friendship, which has made it easier for him to share in the care of Jeronimo, their son.

We briefly spoke to Reyli. Here's what he had to say:

Campus Circle: What satisfactions and rewards has your last album, Buena Compania, given you two years after its release?

Reyli: It's been well-received. I believe it's reached triple-platinum. It's given me many rewards, namely the honor of working with the greats who recorded the album with me. Also, at the final stages of the limited edition of this album, I had the great fortune of recording with Marco Antonio Solis and Vicente Fernandez. It was very positive.

Campus Circle: What is the concept of your new album and when will it be released?

R: It will most likely be out by the end of this year. We don't want to reveal too much about it, but it will be a very special album.

Campus Circle: In what ways do you contribute to the enhancement of the indigenous towns and culture, particularly the Chiapanecos?

R: Whenever I can and we have the opportunity, I aim to get closer to my hometown, Chiapas. I'm trying to contribute in everything related to social implications, and people in need. We have a foundation there which my mother administrates. We always aim to maintain that attitude of social awareness.

Campus Circle: How is your relationship with Ana Barbara? Is Jeronimo growing up with both his parents?

R: Ana and I are friends. Ana lives here in Los Angeles and I live in Mexico. In all honesty, we've both been very conscientious and proud parents to our son, but no, Ana and I have never been a couple - only friends.