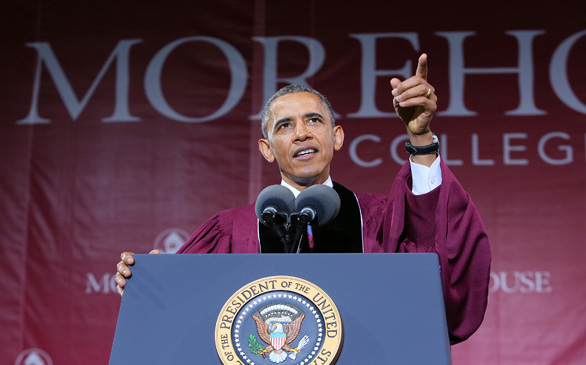 President Barack Obama urged graduates of a celebrated historically black college Sunday to use their education to help others and to work for "something larger than yourself," citing the example of civil rights leader Martin Luther King Jr.

In the commencement address at Morehouse College in Atlanta, Obama urged graduates headed to law school to make sure they "defend the powerless" during their careers. He said new physicians should find ways to "heal folks in underserved communities," and business school graduates should consider "putting people to work, or transforming a neighborhood."

Morehouse opened after the Civil War and is the nation's only all-male historically black college. King graduated from the school in 1948, and Obama said King later used the skills and courage he learned there to become a moral beacon.

King, who entered college at age 15, "was an unknown, undersized, unassuming young freshman who lived at home with his parents. I think it's fair to say he wasn't the coolest kid on camps," Obama said.

"But his education at Morehouse helped to forge the intellect, the soul force, the discipline and compassion that would transform America," he said.

Obama said King's professors "encouraged him to look past the world as it was and fight for the world as it should be." Thanks to them, he said, "young Martin learned to be unafraid."

Obama said his own successes have depended less on his Ivy League degrees and grades than on "the special obligation I felt, as a black man like you, to help those who needed it most. ... So it's up to you to widen your circle of concern."

Obama spoke to about 500 graduates and their families, and he received a degree as honorary doctor of laws. He was scheduled to attend a Democratic Party fundraiser later Sunday sponsored by Atlanta Falcons owner Arthur Blank.