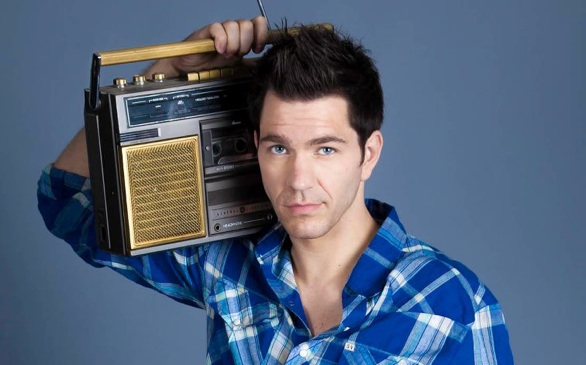 If Andy Grammer had decided to keep singing for another couple of hours, it would have been “Fine By Me,” and surely it would’ve been fine with the entire crowd that packed the sold-out House of Blues in Anaheim last Thursday night.

The audience, who were only allowed to stand, even in the balconies, was enthusiastic throughout the show. They screamed, “I love you!” periodically, ringing through the short moments of silence. Grammer had nothing but enthusiasm and love to give back.

“I love you too! The feeling’s mutual,” he said.

Grammer seemed especially connected to the venue since it was one of the early stops on his first tour in 2011, which Natasha Bedingfield headlined.

“I can’t believe I can fill this place,” he said. “Thank you for coming to hang out with me.”

Grammer’s infectious energy and determination to get everyone involved was unparalleled. For his The Lumineers “Ho Hey” cover, he split the room into a “hey” and (apologizing first) a “ho” side and got the audience to sing along.

However, Grammer’s original songs spoke for themselves, and the crowd sang to hits like “Build Me A Girl,” “Keep Your Head Up” and “You Should Know Better” without his prompting.

Grammer also nervously debuted some new songs for the room, asking everyone to “let the new kids sit at the lunch table with you.”

Needless to say, the singer-songwriter had nothing to worry about, as both “Crazy Beautiful” and “Kamikaze” were as catchy and lyrically smart as everything else in his discography.

When Grammer yelled, “We’re getting to the high-energy part of the show – you ready to go with me?” most of the crowd was probably wondering, “Oh, now it’s the high-energy part?” Fittingly, he followed that statement and the loud cheers with a cover of Macklemore’s “Thrift Shop” and showed us his impressive rapping skills.