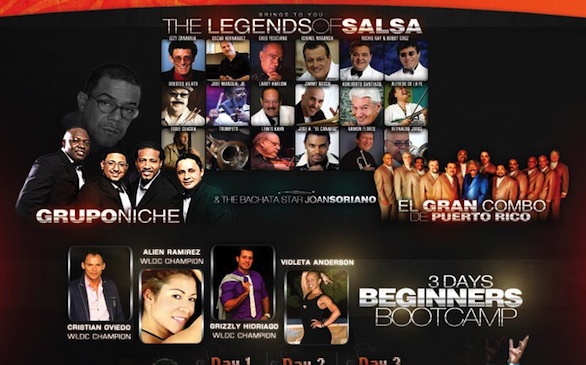 Ever since its mainstream evolution during the 1970s, the music genre of salsa has forever been an epic element of the industry. While reaching not only the Latin American crowd but the general market, as well, salsa has seen ups and downs over the years.

But there’s one man, sporting a distinctive vision to promote salsa all over the globe, who’s managed to place this particular music on a pedestal. He’s Albert Torres, an L.A. resident and businessman guiding the Salsa Congress.

For yet another year, Torres is delivering the 15th Annual Los Angeles Salsa Congress during this coming Memorial Day weekend (May 24-27) at the Westin Bonaventure Hotel.

“I do this every year and what I've noticed is that for the first 10 years, it kept going up,” said Torres. “Then for about a couple of years it kind of stabilized even with the economic situation. Then there was a time in which it wasn't as popular. Bachata and other similar genres were becoming popular. But then within the last year or two, I've seen a tremendous increase as far as salsa in movies.”

Torres added, “I'm also working with some dancers behind the scenes and that's going to be introduced in some of these movies. So I would say in the next few years you'll be hearing a lot of salsa.”

But is salsa for the younger generations?

“The next generation is very educated and a lot of people love dancing, but they don't really know much about the musicians or dancers,” said Torres. “Oftentimes they just don't care, unfortunately. They just listen to the DJs and move on. So we're trying to educate them not only by giving them dance classes during the workshops, but we have means of education.

“We educate about the origins of the rhythms of the music. We have musicians come and talk about their history. We have educational workshops for children. So through this process of education, we feel we'll be able to reach the next generation.”

But the biggest highlight of the L.A. Salsa Congress shines in the momentary reunion of some of the most renown salsa singers of all time: Jose Alberto “El Canario,” Ismael Miranda, Cheo Feliciano, Domingo Quinones, Roberto Roena, and Larry Harlow, among many others.

At one point or another, they formed part of the historic Fania All-Stars era – a time that featured two of the greats in Hector Lavoe and Celia Cruz.

For Torres, there’s a personal satisfaction to see this happen in L.A. For “El Canario,” it’s all about the history.

“Whenever we visit there, we visit our friends and other musicians, and I find these wonderful vibes that come from our fans who've anxiously waited for us and who want to listen to the music we bring,” he said. “We've been going to Los Angeles since the 70s and whenever we get asked to play there, we're always happy to go. We know we'll get to see our friends, and we get to bring our music to an important city like that one to the music industry. It's where the greats play and while I'm there, I feel like a great.”

“El Canario” doesn’t hesitate to commend Torres for his work now only this year, but for others past, too.

“This is an event our friends celebrate year after year,” said “El Canario.” “It's always had a broad perspective, and it's the only festival over the last several years that is of this caliber and features such prominent musicians. The only one who dares to do this and can do it well is Albert Torres, and I wish to congratulate him for having that bravery to do this and that trust in us to be able to give shows like this to his public.”

“El Canario” added, “It's important for us to have people like Albert Torres – people who take an interest and love salsa, and help make more people familiar with the music.”

The Dominican-born “El Canario” is highly regarded as one of the most charismatic, energetic and pleasant salsa singers of all time. When he’s on stage, it’s like watching an Energizer bunny keep going and going without even experiencing fatigue.

“I'm like a battery,” he said. “When I get up on stage, I give it my all. When it's all said and done, my shirt's drenched. It's like a gym for me – no holds barred. Even if every bone in my body aches and I love what I do. I don't look like it as just a job.”

Torres and “El Canario” share the identical passions with regards to salsa: they love it and see a successful future for the genre. Both acknowledged that it’s had its ups and downs, but it’s kept its ground.

“I’m very happy and optimistic that salsa has a bright future ahead,” said “El Canario.”

Soriano, who was born and raised in the Dominican Republic, looks forward to being part of the much-awaited festival.

“I'm very excited because I've never performed in those congresses before,” he said.

Soriano figures to be a solid act. He’s music is romantic and traditional, and it’s quite hard not to like it and be fascinated. He’s the opening act Friday, a night headlined by Grupo Niche. Now deceased Jairo Varela founded the ensemble in the late 1970s.

All things aside, it’s a moment targeted in paying tribute to Varela.

Expect great songs like “Cali Pachanguero,” “Una Aventura” and “Sin Sentimientos” to be played and performed like never before.

Known as The University of Salsa, El Gran Combo close out the ceremonies for the second consecutive year. Torres has a great deal of respect and admiration for them, so he booked them again. But there’s a surprise.

“The Fania All-stars will be getting on stage with El Gran Combo,” Torres confessed. “And if it wasn't El Gran Combo performing, they would've just gone home. My hairs stand up every time I think about it.”

So why should people attend the L.A. Salsa Congress this weekend?

Torres mentioned he expects this to be one of the most incredible events ever put together in L.A. when it comes to this genre of music.

“It's (now) more welcoming to everyone who loves international Latin music and dance,” said Torres. “And now we've seen people from all over the world wanting to come and be part of it. It's almost like the Coachella of Latin music.”