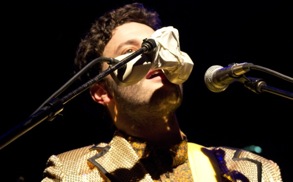 I’ve made a personal bet. If Dale Earnhardt Jr. Jr. doesn’t become one of the biggest music sensations by the end of 2013, then I’m taking $20 out of my wallet and handing it to the closest stranger.

The Detroit twosome, made up of Daniel Zott and Joshua Epstein, have been trudging around the indie music scene for several years now, thanks in part to their fantastic debut album It’s a Corporate World, which released in 2011 on Warner Bros. Records. Since then, Dale Earnhardt Jr. Jr. has been unable to crack into the mainstream. With a newly released EP and a follow-up full-length set to be released later this year, this will be a major year for them.

A drummer, a keyboardist and a gigantic orb (that we’ll talk about later) joined Zott and Epstein who were donning borderline ostentatious, bright gold suites and an impressive degree of confidence. They started with several new tracks off their yet untitled 2013 release and showcased a more polished, produced sound before diving into older tracks like “Skeletons” and “It’s a Corporate World.”

Their catchy pop was bolstered by an impressive live setup that was really something. Tucked in between the band’s trademark lit up “JR JR” sign was a 10-foot-tall gigantic ball. It worked in conjunction with some sort of projector; it was like a bright, giant head that bounced to the band’s sound. It was strange and kind of amazing – it was certainly another talking point of the band’s show.

The live set came across as slightly forced, almost like the executives at Warner Bros. said, “Wear this. Say this, and play like this.” But in this case, it works for the band’s offbeat sensibilities. The group had an inevitable encore where they played their current hit “If You Didn’t See Me (Then You Weren’t On The Dancefloor)” to much enthusiasm.

If everything goes according to plan for the strangely titled pop rock band that is Dale Earnhardt Jr. Jr., then I will be $20 poorer by the end of the year. This is a band to watch.