The Hives: Getting Under Your Skin with Tyrannosaurus Hives 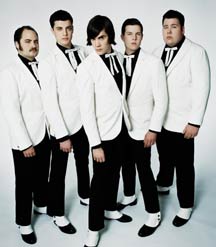 Who remembers two years ago when "Hate To Say I Told You So" was all over the radio? And you found yourself with the song stuck in your head, yelling out incoherencies with singer Pelle Almqvist in your car? You couldn’t have erased that song from your brain if you had wanted to, but does anybody remember what happened after that? According to the mainstream spotlight, nothing much did happen.

After a long stint in obscurity, Swedish purveyors of addictive music The Hives are back with a fresh new single, "Walk Idiot Walk, " and a new album, Tyrannosaurus Hives — just as infectious and energized to boot.

Consisting of Almqvist, guitarists Nicholaus Arson and Vigilante Carlstroem, drummer Chris Dangerous and bassist Dr. Matt Destruction, The Hives have become known as a performance-oriented band. This time around, the band has traded in their uniform of GQ suits for 1920s tuxedos and Colonel Sanders bow ties — a bit of a metaphor for their current album’s new style.

"We wanted to have a really dry sound, a really robotic and monotonous sort of thing," says drummer Chris Dangerous, "because we didn’t want to make the last album again, even though it sounds great. This is sort of the ’80s sounding record as opposed to the ’60s sounding one."

Dangerous also believes fans have been open to the band’s new material, saying the reception from crowds has been "really good, because people haven’t heard it. I mean, they’re a bit stiff in the beginning, but then their heads start to nod. [Then] you know they’re yours."

Though The Hives’ music has that catchy pop quality to it, the band hardly shies away from making a statement. "The thing is, about 70 percent of the people that walk this earth are idiots," says Dangerous of the meaning behind "Walk Idiot Walk," the lead single off Tyrannosaurus Hives. "It’s really about wrong people at the right places, so to speak. Idiots in charge of things they don’t know shit about."

While there has been a recent influx of bands trying to utilize the same formula for success as The Hives, Dangerous is confident that their band can stand the test of time. "I think we try harder," he says of what sets his band apart from the pack. "We really try to be the band that we would like to go and see. I don’t know if that’s the case with other bands because I get bored, which I hope you don’t get by watching us. We just try the best we can.

"Sweden has always been pretty good at stealing stuff from the Americans, the British and the Australians," Dangerous adds with a laugh, "and just putting a twist on it, I think that’s why we get off so good." Originality and copycats aside, this bout of The Hives will surely last as long as their fans remain itching to listen.