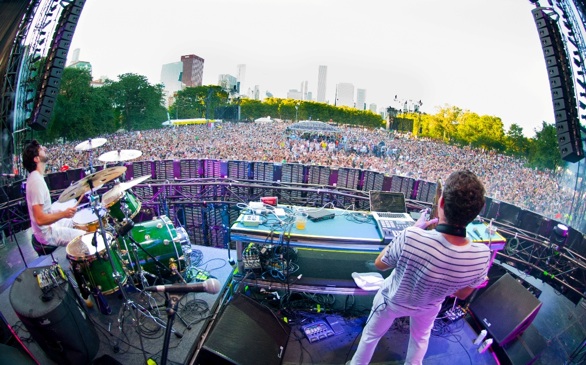 Big Gigantic recently came out with a remix of Jay-Z's "Can I Get A..."
(Credit: Dave Vann)

Over the last five years, Big Gigantic has blown up as one of Colorado’s biggest homegrown acts in its vibrant music scene. With a second headlining gig at Red Rocks Amphitheatre slated for later this year, the Boulder-based outfit stands determined to do things bigger and better than it did before.

But for as high as Salken and saxophonist/producer Dominic Lalli have soared since teaming up in Colorado, they’ve been eager to expand their “Big G family” in larger West Coast cities, where electronic dance music remains all the rage nowadays.

It’s one of the reasons, in fact, why they’re headlining tonight’s Budweiser Made in Los Angeles Party at L.A. Center Studios.

“It’s a win-win situation,” said Lalli of the 21-and-over event, which requires guests to RSVP online and give a $10 donation at the door in return for free beer. “We thought it would be a good look for our fans.”

With the roll that Lalli and Salken have been on lately, it’s also one hell of a deal for those who have never seen the two former roommates perform live.

“We haven’t been to L.A. as much as we’ve been to some other places, so we’re just trying to get our name out to as many people as we can,” said the classically trained Lalli, who received his master’s degree at Manhattan School of Music in New York City.

Believe it or not though, there may not be another act that has made as big of strides in the last year. Considered one of Rolling Stone’s 10 must-see bands at Bonnaroo in 2012, Big Gigantic assiduously captivated audiences at almost every U.S. festival last summer with its unique brand of jazztronica.

And it’s not hard to see why.

Fusing sexy saxophone lines with bouncy hip-hop grooves and huge dubstep drops, Lalli and Salken have been able to reel in fans from both the jam band and EDM communities much like their Sound Tribe Sector 9 friends have done for more than a decade now.

“It’s tricky, but I think it’s worth the journey,” said Lalli. “I’m still trying to figure out what the journey is.”

Whether it’s been collaborating with up-and-coming producer GRiZ or remixing tracks from some of the biggest emcees in hip-hop today, Big Gigantic’s journey has been full of twists and turns up to this point.

One of those remixes has been Macklemore & Ryan Lewis’ 2011 hit single “Can’t Hold Us,” which continues to dominate Top 40 radio stations across the country.

“It’s been crushing,” Salken said when it comes to playing the remix live.

According to the 31-year-old, it could also be the next track released before the duo unleashes a new full-length album.

Yet, with a rigorous summer touring schedule that includes top-billing spots at festivals like Summer Set and North Coast, Big Gigantic still has a ways to go in the studio.

“It’s a bit of a slow process,” admitted Lalli. “The next album is really starting to take shape, and that’s always an exciting thing when you can see what it’s going to become.”

Following up 2012’s Nocturnal will be no easy task, either. Reaching No. 2 on the iTunes electronic charts, the record irrefutably stands as the group’s best work to date.

Big Gigantic fans in the Southland, nevertheless, should get a good taste of what’s to come from the band tonight after openers Milkman and The Mowgli’s take the stage.

And if that’s not enough, they’ll have another opportunity when the twosome returns in mid-September to headline this year’s Mad Decent Block Party with moombahton giant Major Lazer and indie poppers Matt & Kim.

“We’re all over the place,” said Salken. “We’ve got surprises up our sleeve.”

If that’s what it takes to hook L.A. fans these days, then so be it.