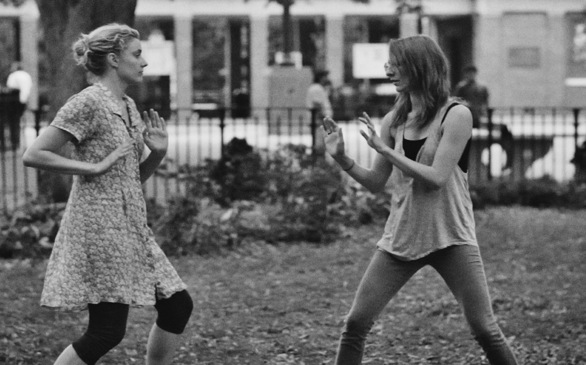 If Lena Dunham has staked her flag with one hand (a bottle of Kombucha in the other) on the genre of post-graduation ennui, Frances Ha delves even further into the ‘20s spectrum, just before the velvet curtain closes. And guess what? It still sucks, at least according to the script, co-written by director Noah Baumbach and his lead Greta Gerwig.

For a film about fluttering millenials, there’s something very refined in its making. Baumbach shot the entire movie in black and white, and nobody does the dance in the sheets on screen. If somebody gets lucky, it definitely isn’t our lady protagonist, not even with Adam Driver, who plays Hana’s maybe-murderer-in-a-murdery-way boyfriend in “Girls.” (“Uhn-dateable!” her one out of many temporary roommates quips, palm-on-face, when Frances lets her lesser attractive quirks show.) The film has all the makings of a dreary tale, but it’s a million miles away from it. Actually, it’s sort of amazing.

The story opens with 27-year-old Frances and her best friend Sophie (played by Sting’s daughter, Mickey Sumter) in that now familiar bosom buddy sequence: they spend all day together couch bumming, afternoon brunching, tap dancing, ukelele string strumming, play fighting in Central Park and, eventually, falling asleep on the same mattress while telling each other “the story of us” (Sophie will be an awesome publishing mogul; Frances will be a famous modern dancer).

But as any plot development goes, that kicky David Bowie record has to stop spinning, and our heavy-footed, 5-foot-8-inches heroine falls into a puddle. Sophie leaves the apartment to move into a Tribeca loft with another friend, and Frances loses her position at the dance company she works for. The unemployed ballerina then galumphs her way into a spiral of misfortune and mishaps, including an impromptu solo trip to Paris funded by a pre-approved credit card fresh from the mailbox.

Frances' Eeyor-ish yet casually cheerful expressions depict a buoyant optimism on the verge of bursting, but it never does. One particularly poignant scene has Frances, with that heartbreaker of a face, at the top of an elevator looking back to her parents as they see her off at the Sacramento airport (Gerwig’s real-life parents play them in the film, and Sacramento is her actual hometown).

Despite its visceral truths, the script has wit for days and falls nothing short of uproarious. To reveal that Frances eventually reaches some sort of chirpy ending is hardly spoiling the plot. So maybe some Fun. lyrics are right – that never-ending warbling of “it gets better” has some truth to it. However, that doesn’t mean that the city has fixed all its potholes. It is going to get bad again.